An important letter from poet and artist David Jones (1895-1974), author of In Parenthesis, to novelist Anthony Powell. The letter was bought for the National Library of Wales with the aid of a grant of £650 from the Friends of the National Libraries.

The letter, which is dated 10-11 July 1967, discusses Welsh history and genealogy, topics on which these two men of letters - both of Welsh descent - shared a common interest. The National Library of Wales’ extensive David Jones Archive - the most complete archive of the artist-poet’s work in existence - contains two associated letters from Powell to Jones, dated 8 and 16 July 1967 respectively (NLW, David Jones Papers, CT2/2). It also contains a draft of a letter from Jones to Powell, dated 15 July 1967, but in fact responding to Powell’s letter of 16 July (NLW, David Jones Papers, CF1/12, f. 12). 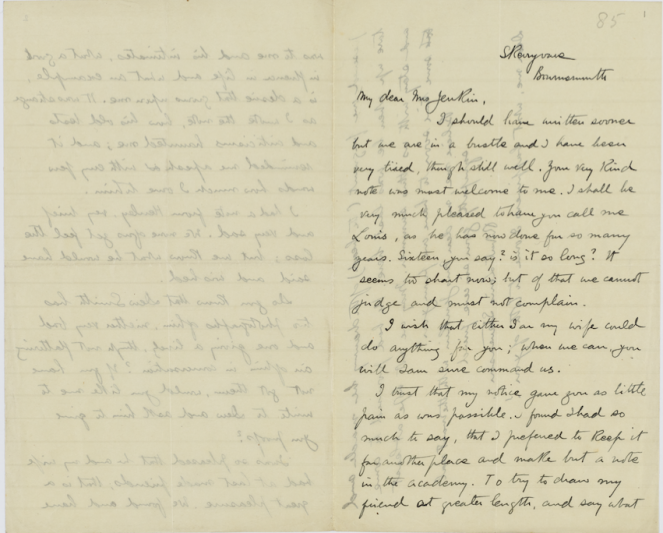 The 38 letters of Robert Louis Stevenson to Anne Jenkin are published in the comprehensive Yale edition of his letters, but of the 15 which Fanny sent to Anne, only the heart-rending letter written the day after Stevenson’s death is known to be published. It is therefore in Fanny’s letters that the research value of the collection probably lies.

Anne was the widow of Fleeming Jenkin, Professor of Engineering at Edinburgh University. In that capacity he taught Stevenson, and though the latter showed little aptitude or interest in the subject, the two became close friends and Stevenson enjoyed visiting the Jenkin family in Edinburgh. Like Stevenson, the Jenkins were fond of amateur dramatics, and with their three young sons Stevenson must have been in his boyish element. Fleeming Jenkin died very suddenly in 1885 aged 52, and this correspondence begins when Anne asks Stevenson to write a memoir of her husband. A postscript to the earliest Stevenson letter in the collection reads ‘Dear me, what happiness I owe to both of you!’

Register or memorandum book made for Thomas Bourchier (Archbishop of Canterbury 1454-86). 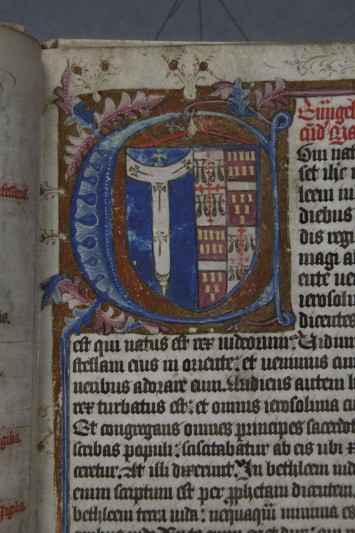 A manuscript memorandum book made for Archbishop Thomas Bourchier (c.1411-1486). Bourchier was Archbishop of Canterbury for 32 years, during the tumultuous period of the Wars of the Roses: he crowned Edward IV, Richard III and Henry VII. His activities within the diocese of Canterbury, however, are less well documented. The official record of this Archbishop’s administration is held by Lambeth Palace Library, as part of its long series of archiepiscopal registers from 1279 onwards. F.R.H. du Boulay, in his published edition (1957) of Bourchier’s register, notes that it contains no visitation returns and is in some other ways less complete than one might have expected, perhaps suggesting physical loss or that some information was never formally written up. This may not be wholly surprising, given the disruptive events that were taking place at the same time.

The volume which has now been acquired may help to fill some of the gaps in our knowledge of the more local aspects of Bourchier’s tenure of the see of Canterbury and thereafter.

The papers of James Watt, tutor to Princes Edward and Albert 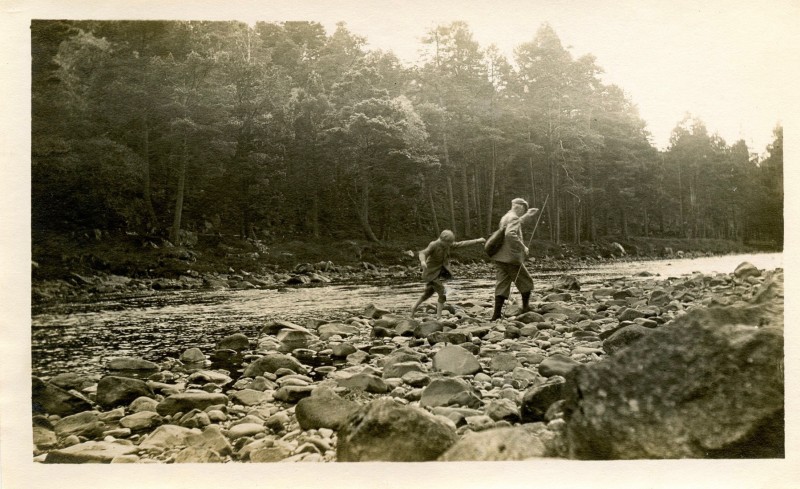 In 2016, a collection of the papers of James Watt was donated by the Watt family to the Royal Library, Windsor Castle. The donation was made through Friends of the National Libraries.

Watt was a master at the Royal Naval College at Osborne, and tutored the two eldest sons of George V and Queen Mary, both future Kings.

The collection includes Royal Naval College reports for the Prince of Wales, autograph letters from the Princes, and about 75 letters from Henry Hansell (tutor to the royal children) to Watt with drafts of his own letters to Hansell.

Letter from Sir George Calvert to the Marquess of Buckingham 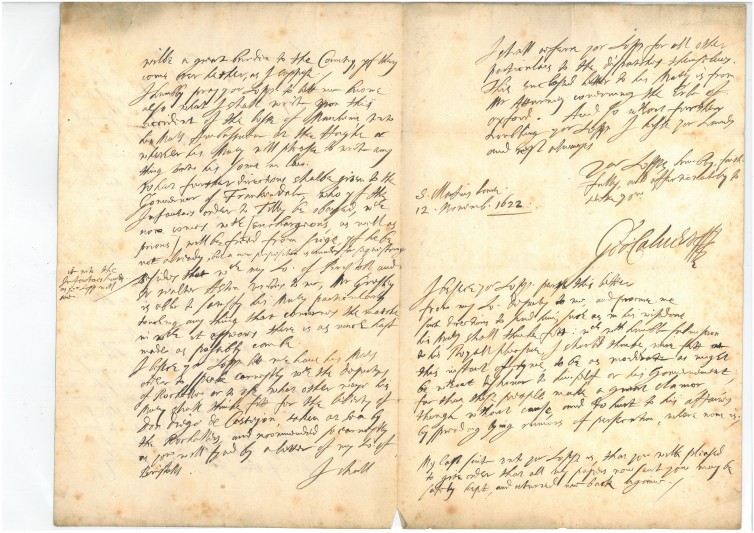 A letter written to the Marquess of Buckingham by Sir George Calvert in November 1622, when Calvert was one of the two principal Secretaries of State to James I, with responsibility for external affairs. George Calvert was born on the Kiplin estate in 1579 and built Kiplin Hall in the early 1620s. In 1620 he founded a colony in Newfoundland, which he named Avalon. He was created 1st Baron Baltimore in 1625 and founded Maryland in 1632, just before his death.

Sir William Hamilton (1731-1803), now perhaps better known as the cuckolded husband of Nelson's Emma Hamilton, was ideally placed as a diplomat in Naples to pursue his interests in art and classical antiquities. This work covers his collection from the tombs in Sicily. Its striking plates, accompanied by parallel texts in French and English, were drawn and engraved by Johann Tischbein (1751-1828), director of the Naples Academy and travelling companion of Goethe. Many surviving copies are in grand bindings but the Mount Stewart copy is still in its original boards with roan spines, and entirely uncut, making it a useful source for those interested in the history of book production, as well as for the art historian.

The volume contains 20 issues of a rare 19th century periodical, the British Guiana Monthly Messenger, and four equally rare 19th century British Guiana pamphlets.This is an important acquisition for the library of King's College London, complementing and enhancing our already extensive and internationally significant holdings in the field of British imperial and colonial history. By virtue of the extreme rarity of its contents, as well as their intrinsic interest, this volume has the potential to cast new light on the then colony of British Guiana at an important period in its history.

This is a beautiful humanist edition of Boccaccio’s most famous work and one of the earliest with illustrations; the 101 woodcuts are copies from the 1492 incunable edition. This copy is also important for its position within the history of publishing the text; academic research on the edition concludes that it is based on the previous Florentine edition, but corrected using earlier manuscripts including quite possibly one of Boccaccio’s own originals. As well as its importance as a text, this copy has remarkable annotations by the Elizabethan spy William Herle (d. 1588/9), who worked for William Cecil and Francis Walsingham in the Low Countries.

Heywood’s drama is a significant addition to the Guildhall Library's collection of ‘Citizen’ dramas and is the only copy of this early edition in a public library. The play itself was performed at the Red Bull playhouse which is just a mile from Guildhall Library. It features London apprentices, including a Grocer and a Haberdasher – the archives of both of these guilds are held at Guildhall Library.

Chawton House Library has English translations of Staël’s best-selling novel Corinne (1807) and Delphine (1807), plus a fourth edition of Delphine (1818), but the first edition of Corinne was a significant omission from the collection. July 1817 saw two deaths – of Jane Austen (1775-1817), an English novelist with a solid but relatively modest success, and of Germaine de Staël (1766-1817), a long-standing superstar of pan-European intellectual, political and literary life. Over the two centuries since, the relative reputations of these two writers have re-aligned in ways that would have astonished their contemporaries, admirers and critics alike.