Bate (1868-1913) had recently become Secretary of the Royal Glasgow Institute of Fine Arts. Who's Who in Glasgow for 1909 notes that “Mr Bate is an enthusiastic collector of 18th-century furniture and old English glass; he is a student of genealogy and heraldry, and no unskilled designer of book-bindings in illuminated vellum. He is also the author of articles and brochures on such artistic subjects as the pre-Raphaelite painters, English table glass, and the future of oil-painting”.

Bate’s position at the Royal Glasgow Institute enabled him and his wife to cultivate a social circle of key luminaries of the Glasgow art scene of the late 19th and early 20th centuries. This volume therefore provides a unique record of the informal creative networks that flourished in Scotland’s great industrial city during this period. In particular, the album contains silhouettes of a number of artists, designers, and architects who attended Glasgow School of Art, or were otherwise associated with the School. These include:

Frances Macdonald McNair (1874-1921)
Macdonald is an important figure in the history of Scottish art. Along with her husband James Herbert McNair (1868-1955), her sister Margaret Macdonald (1865-1933), and Margaret’s husband Charles Rennie Mackintosh (1868-1928), she was an active member of the so-called ‘Glasgow Four’ who between them developed the Glasgow Style aesthetic that is so connected to the School of Art. All four artists attended lessons in the School. The Friends of the National Libraries generously funded the GSA purchase of Das Eigenkleid der Frau, with a binding by Macdonald, in 2014.

James Craig Annan (1864-1946)
Annan was a pioneering Scottish photographer and Fellow of the Royal Photographic Society. The son of photographer Thomas Annan, he was the first to introduce the German invention of photogravure to Britain. His 1893 photograph of the architect of Glasgow School of Art, Charles Rennie Mackintosh, has become the seminal image of him. His work features in The Magazine (1893-1896), a student publication by Charles Rennie Mackintosh and his contemporaries held in GSA Archives.

Jessie M. King (1875-1949)
King studied at GSA from 1892-1899 and was a hugely successful and prolific illustrator and designer of books. GSA Library holds an important collection of around 70 books by her.

Thanks to generous funding from the Friends of the National Libraries, this unique album has now returned to Glasgow, where it complements other artefacts and texts relating to turn-of-the-century creative networks held in Glasgow School of Art’s archives. As well as its evident research potential, the album will be used as a catalyst for creative learning through the art of silhouette-cutting. 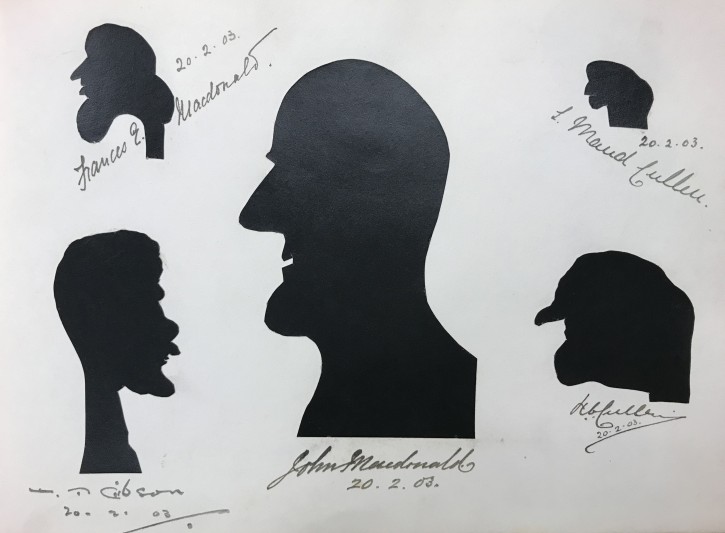