This acquisition complements the Library’s outstanding holdings of illustrated anatomies, many from the collection of the distinguished surgeon and scholar Sir Geoffrey Keynes (1887–1982). Keynes assembled a fine library of early anatomy books, including copies of Paré’s collected works. He also published an edition of The apologie and treatise of Ambroise Paré (1951) and wrote an article on Paré for Scientific American in 1956. The Library also holds six works by Paré in the collection of Bishop John Moore (1646–1714), whose 30,000 books and manuscripts reflect the breadth of his interests, above all in medicine. Finally, the Anatomie universelle also complements the 16th-century French works in the Montaigne Library of Gilbert de Botton, held at Cambridge. Paré and Montaigne both wrote on the topic of ‘monsters and prodigies’ and Montaigne may have drawn on Paré’s work for his comments on old age in ‘Of repentance’ in his Essais.

This copy bears an early ownership inscription (‘Vaugeleen’?) and was later in the collection of the doctor and poet François Moutier (1881–1961), testimony to the long tradition of doctors and surgeons collecting Paré’s works (William Hunter and William Osler, as well as Geoffrey Keynes, are other examples). The book is therefore also of note for the history of collecting, but its primary research value clearly lies in the history of anatomy and anatomical illustration. It will be of great use to students and researchers at Cambridge, where this is an active area of interest, as well as to visiting scholars, and will support many lines of inquiry.

The book will be fully digitised for the Cambridge Digital Library, making it freely accessible to a global audience, and was exhibited at the Library in January 2018, along with a selection of illustrated anatomical books from Sir Geoffrey Keynes collection. 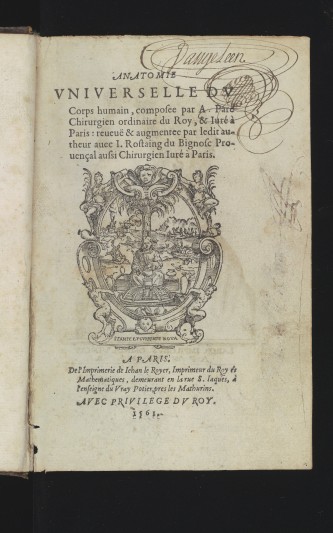 Title page from the 'Anatomie universelle'. Images courtesy of the Syndics of Cambridge University Library. 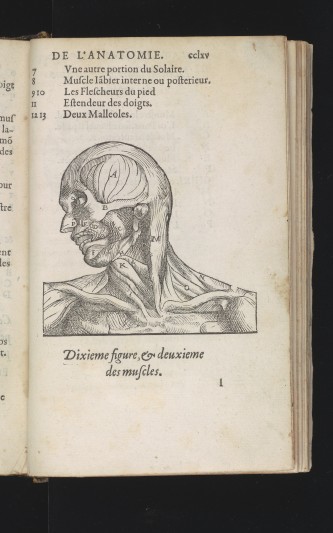 The muscles of the head, from the 'Anatomie universelle'.