Ted Hughes Animal Poems, presentation copy inscribed by the author to his son

Frieda Hughes’s sale in March of the personal and literary effects of her parents Ted Hughes and Sylvia Plath contained many treasures. One item of unique bibliographic, literary as well as personal significance was a copy of Hughes’s Animal Poems, published in an edition of up to 100 copies in August 1967 by Richard Gilbertson of Crediton. A generous grant from FNL helped Hughes’s alma mater Pembroke College, Cambridge acquire it for their growing collection of the poet’s books and manuscripts.

Ann Skea has claimed that Hughes’s interest in fine press editions started in collaboration with his sister Olwyn, under the imprint of her Rainbow Press. These editions appeared from 1971. But Animal Poems was published four years earlier, the year of his third full-length collection, Wodwo.

Animal Poems rivals any later Rainbow. This copy is beautiful: one of six bound in full dark green levant morocco gilt. Its title represents Hughes’s own first acknowledgement of what is now a commonplace: that he is one of the twentieth-century’s greatest poets of wild nature. These fourteen poems don't just include the best of his early work: ‘Hawk Roosting’, ‘Jaguar’, ‘Pike’, ‘An Otter’, ‘Skylarks’. They look forward too: a footnote to ‘Lineage’ indicates that this is the first time this poem has been printed. It begets Crow (1970).

An endnote reveals another novelty. These first six copies were bound with blank paper interleaved with every printed folio, for Hughes to write out fair copy manuscripts of opposite the printed text; others were to contain three manuscripts; others still a single manuscript, including poems not printed here, such as ‘The Thought Fox’ [sic].

Nicholas himself printed the first to appear, ‘Caddis’, for his own Morrigu Press in April 1981.  ‘The Muskellunge’, about the North American cousin of the pike, appeared in Under The North Star (1982). ‘Live Skull’, another pike poem was published as ‘The Reservoir’ in 1986. ‘Trenchford’, about failing to catch pike on a Dartmoor reservoir, remains unpublished; ‘A Trout?’, appeared in 1995.

Finally, there are two poems included in River in 1983, with Nicholas its dedicatee. ‘Catadrome’, another Morrigu poem, turns on the eel. But the highlight is the earliest known fair copy of one of Hughes’ most celebrated poems, ‘That Morning’, here dated and placed ‘July 1980, Alaska’, with a notable manuscript variant to the text later published.  Seamus Heaney read ‘That Morning’ at the service to unveil the plaque in honour of his friend (containing lines from its final stanza) at Poets’ Corner in December 2011. But ten years earlier, in 2011, it was chosen for Pembroke College Library’s stained glass windows devoted to Hughes. To read these poems in manuscript under those windows is to feel their ‘creatures of light’ still moving. 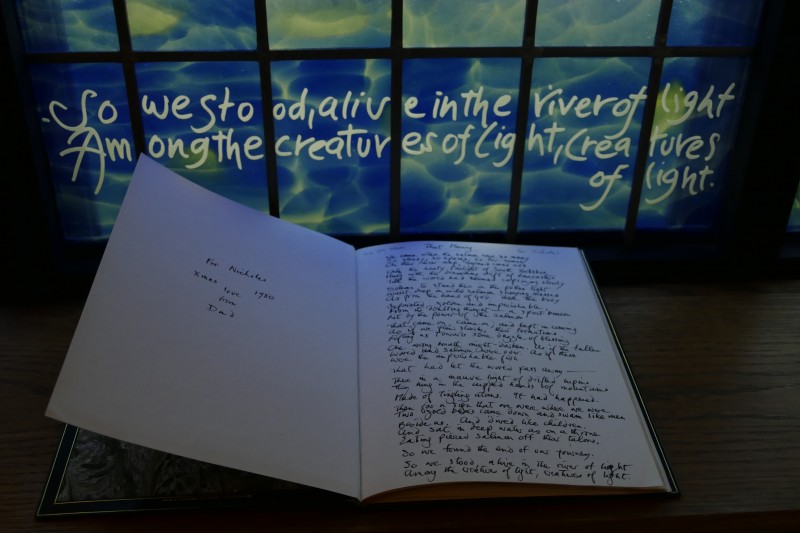 Pembroke's stained glass windows dedicated to Hughes, with the manuscipt of 'That Morning', from which the text in the windows is drawn. Images courtesy of Pembroke College. 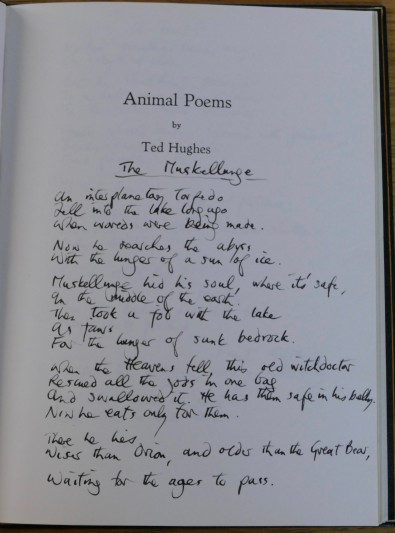 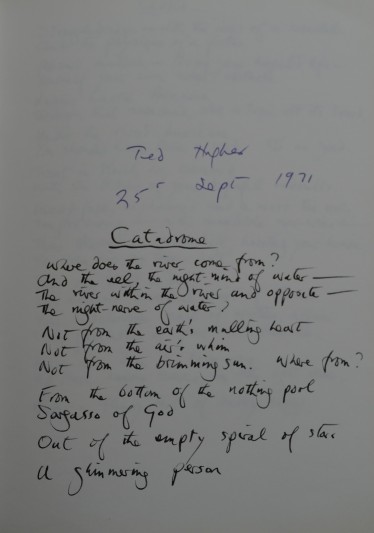