An appendix to Euclid's Elements of Geometry

A generous grant from the Friends of the National Libraries has supported the acquisition of a rare edition of Euclid’s Elements that quite literally stands out from other publications of the text: John Cowley’s Appendix to Euclid’s Elements (1758). His innovative approach enabled readers to fold pop-out three-dimensional figures while they studied Euclid’s text.

Dating from around 300 BC, Euclid’s Elements of Geometry became the most influential mathematical text ever written. It remained a standard work until the 19th century, and its influence on mathematics, modern science and the reception of classical philosophy cannot be overestimated. The Elements has also assumed a central position in printing history from the very beginning. It was one of the earliest mathematical works to be printed, and it is one of the most extensively printed texts ever written, with the number of known editions second only to the Bible.

Ever since the 15th century, printers have grappled with the question of how to make geometrical texts easier to understand by illustrating the text with diagrams. However, the flat surface of a page does not easily lend itself to the clear illustration of complex multi-dimensional figures.

John Cowley was a leading mathematician of the 18th century. He had a particular interest in how to make Euclidean geometry easier to understand for students. Cowley’s 1758 edition of the sections of the Elements dedicated to solid figures presented an important innovation in the visual representation of Euclid’s figures. It includes 42 diagrams printed on pasteboard, designed to be folded into three-dimensional pop-up figures by the reader. The accompanying text contains step-by-step instructions for folding the figure.

Although the use of pop-up diagrams in editions of the Elements was not new (the first attempt at using these can be found in John Day’s edition of 1570), Cowley’s edition introduced more advanced folding techniques than any previous diagrams, and it was the first attempt at representing polyhedrals in a three-dimensional way.

University College London holds the largest dedicated collection of editions of Euclid in the world   The core of this collection was donated in 1870 by John Thomas Graves (1806-70), Professor of Jurisprudence at UCL, as part of his magnificent mathematical library collection. It has since been added to by subsequent purchases, and now numbers 430 works. Thanks to the FNL, the acquisition of John Cowley’s Appendix has filled a conspicuous gap in the collection. 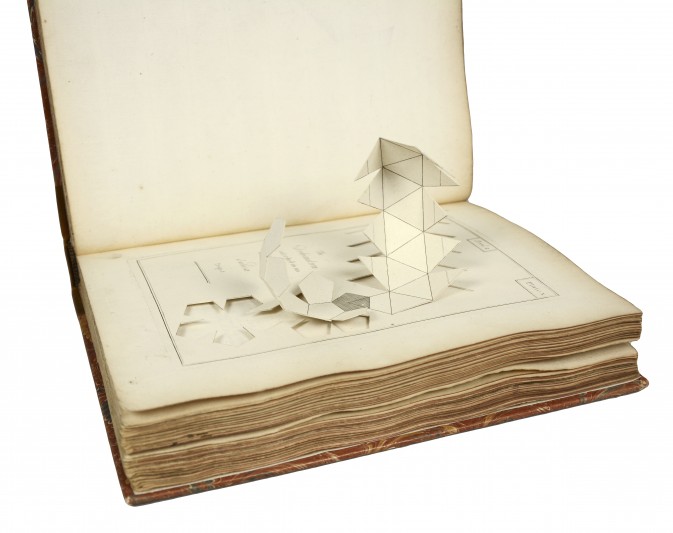 A Dodecahaedron inscribed in an Isocaedron. Courtesy of University College London.