John Morton, Archbishop of Canterbury from 1486 until his death in 1500, a cardinal (from 1493) and ecclesiastical lawyer, Master of the Rolls and Lord Chancellor of England, was one of Henry VII’s closest advisers and simultaneously also Chancellor of both Oxford and Cambridge University. He is remembered as the inventor of ‘Morton’s fork’ (though this is itself probably an invention of Francis Bacon), as the first patron of Thomas More and of early Tudor dramatists such as Henry Medwall, and as the builder of Morton’s Tower at Lambeth, as well as palaces at Croydon and Hatfield.

Morton’s library contained both manuscripts and printed books, reflecting a wide range of interests, though few survive today. Of his printed books, three volumes on Roman law (Venice, 1471-5) by the Italian jurist Bartolo de Sassoferrato, which Morton would almost certainly have regarded as a set, are divided between Harvard, the British Library and Cambridge University Library; the latter also holds a volume containing works by Giovanni Boccaccio on classical mythology and medieval geography (Venice, 1472-3), while an odd volume of a Latin Bible, acquired earlier in Morton’s career, is at Trinity College, Cambridge. A few of Morton’s manuscript books, classical and legal texts, are to be found in the Bodleian and the British Library. His official registers as Archbishop of Canterbury are at Lambeth.

With the generous support of the Friends of the National Libraries, Lambeth Palace Library has been able to acquire the only printed book from Morton’s library known to survive in private hands: it is again a Venetian edition of the 1470s, of the Institutiones oratoriae, a textbook on the theory and practice of eloquence by the classical Roman rhetorician, Marcus Fabius Quintilianus. This work, which quickly established itself in humanist educational circles, may also have had practical uses for Morton, who could well have bought it new during one of his diplomatic missions to France, Flanders or Rome in the 1470s and 1480s. Typographically a strikingly beautiful book, it bears Morton’s handsomely painted arms on its first leaf, and below this a rebus, punning on Morton’s name – a barrel, or tun, with the letters MOR. Running through this copy is a system of foliation and subject headings, written in the upper margins in a 15th-century English hand, which seems to be common to several of Morton’s surviving books.

The volume’s subsequent provenance and annotations, following Morton’s death in 1500, are also of considerable interest. One of its early owners was William Hone (died 1522), Fellow of All Souls College, Oxford, and later a canon of Chichester and master of Chichester prebendal school, who in 1504 became Latin tutor to the future King Henry VIII. Another was John Cole, also a Fellow of All Souls, later a royal chaplain, canon of Wells and Warden of All Souls College from 1525 to 1528 (died 1536). Both these men had close connections with Morton’s household and were beneficiaries of his patronage.

Morton is the first Archbishop of Canterbury known to have owned a printed book – in the preface to the Quintilian, its printer Nicolaus Jenson is even credited with the invention of this new-fangled technology. This acquisition will sit well beside Lambeth Palace Library’s copy of the Gutenberg Bible, the only surviving copy to have reached England in the 15th century, and the Library’s 1466 Cicero, one of the earliest documented purchases of a printed book by an Englishman (bought in Bruges in 1467 by John Russell, later one of Morton’s episcopal colleagues). 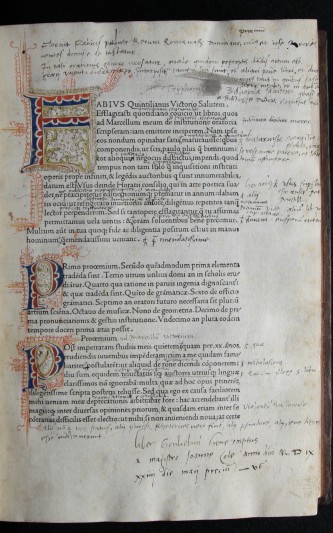