Durham University is grateful to the Friends of the National Libraries for their support for the University’s purchase of this archive.

Lambton was widely acknowledged in his lifetime as one of the foremost political figures of his generation.  He was very well connected, regionally, nationally and internationally, through familial, personal and professional relationships; and his role in the campaign for reform placed him at the centre of English politics.  He was also a complex character full of contradictions.  His personal life was punctuated in the early 1830s by a series of bereavements, which left him devastated.  The effects were noticeable within his public life, where he had a reputation for being short-tempered and obstinate as well as energetic and radical.  He lived the life of a wealthy aristocrat, able as he put it, to ‘jog along’ on £40,000 a year, and pursued interests in literature, art and science.  The archive reflects the breadth of his career and personal connections, and promises to reveal a compelling narrative of events and provide insights into the views and actions of those involved.

Lambton is best known as one of the key figures responsible for the Great Reform Act of 1832.  The most important section of the archive relates to this central concern of his life.  The papers, including many hundreds of letters, drafts of speeches and other documents, provide a detailed insight into the politics of the period and the progress of the Bill.   Some of the most significant individual items are the papers of the ‘Commission of Four’, including an original draft ‘Report of the state of the Representation’, signed by Lambton, Sir James Graham, Lord John Russell and Lord Duncannon.  There is extensive correspondence with Earl Grey (Prime Minister and Lambton’s father-in-law) and many other key political figures of the time.

The archive also contains material on international affairs and diplomacy, in particular, papers relating to Lambton’s (then Lord Durham) terms as Ambassador to Russia, correspondence with Leopold, later King of the Belgians; and some material relating to Lord Durham’s term as Governor in Chief of Canada and his involvement in the British settlement of New Zealand.  Family correspondence and papers add to the richness of the archive.  There are letters to Lambton’s second wife Louisa, daughter of Earl Grey; letters from Queen Victoria to Louisa, as a Lady of the Bedchamber, in 1838; and letters from Humphrey Davy and Harriet Martineau.

The archive will be kept at Durham University’s Palace Green Library, appropriately just a few miles away from Lambton Castle, and stored alongside the Earl Grey family archives.  They will be available to scholars and the public for study.  We also plan to establish a series of projects and events to showcase and open up the archive to both the public and local schools as part of our engagement programme. 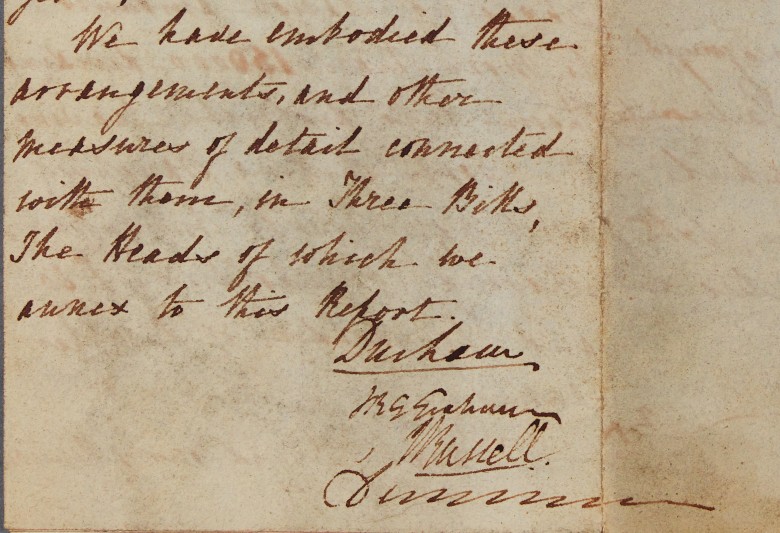