The University of Nottingham is extremely grateful to FNL for supporting the purchase of this small archive relating to the literary estate of D.H. Lawrence (1885-1930). The acquisition now forms part of our DH Lawrence Collection, which was designated in 2008 by the former Museums, Libraries and Archives Council as being of national and international importance.

Lawrence scholars had long known about the dispute between Lawrence’s widow Frieda and his siblings over his literary estate and copyright. However, it is not thought that they have previously had access to these papers and so this purchase provides a significant addition to the Collection. It adds to our knowledge of the fraught relationship between Frieda and Lawrence’s siblings and the dispute over the rightful ownership of his manuscripts and the payment of royalties.

Following Lawrence’s death intestate in March 1930, the family sought the help of Ottoline Morrell’s husband Philip Morrell. These letters had been found by Paul Rassam amongst a group of Ottoline Morrell papers which he had previously purchased at auction.

The collection comprises 21 letters (La/Mc/2/7). It includes letters to Lawrence’s widow Frieda from Ada Clarke (whose papers we also acquired this year with support from FNL)  and her husband Eddie; from his brother George Lawrence; from S.S. Koteliansky; and from his literary agent Laurence Pollinger (Curtis Brown) and Heinemann Publishers. There are also letters to Philip Morrell from Ada Clarke, George Lawrence and the solicitor C.D. Medley (Field Roscoe & Co.).  In addition there is a telegram from Laurence Pollinger to Frieda Lawrence.

In one annotation Frieda states ‘It all seems like a dirty pool, with tadpoles wriggling for a little money!’  We look forward to Lawrence scholars bringing greater clarity to this dirty pool. 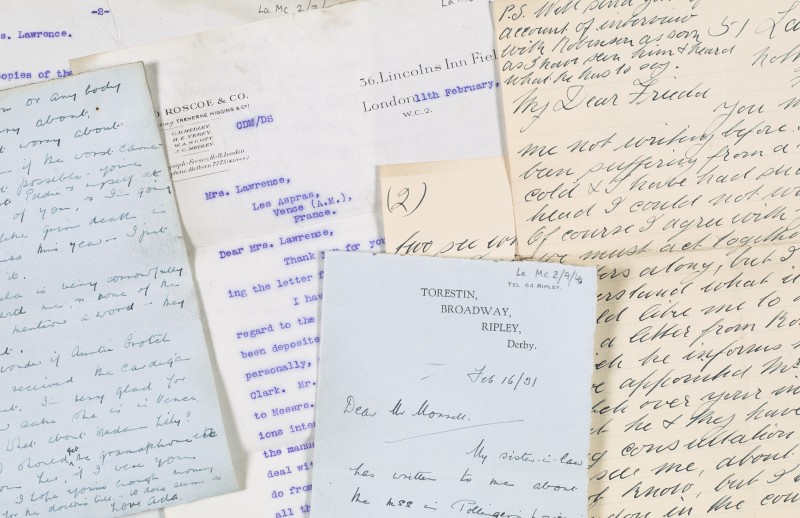 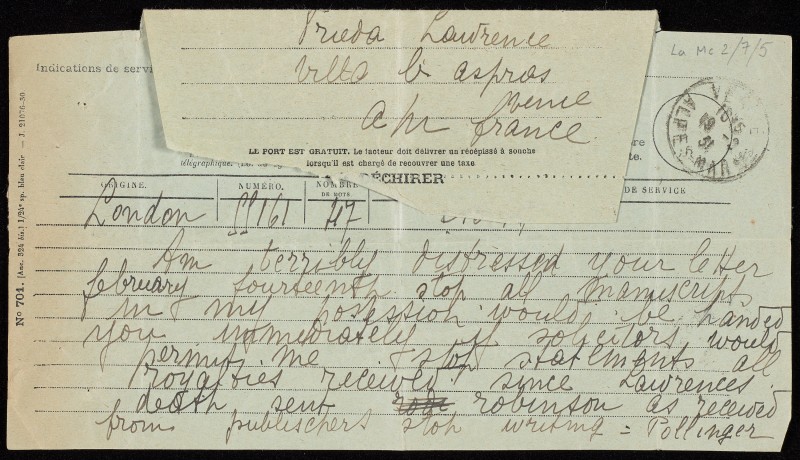