A substantial family archive relating to the Glasgow produce broker William Davidson (1861-1945). Davidson is well known as the client for whom Charles Rennie Mackintosh (1868-1928) designed Windyhill, and he remained a loyal friend and supporter throughout Mackintosh’s life.

The archive comprises some 20,000 items in total, dating from c. 1870 to the mid-20th century. The papers include personal and family correspondence, business records, letters relating to art exhibitions and art collecting, and numerous photographs. There is a significant amount of correspondence about the death of one of William Davidson’s sons in the First World War. Also significant is a group of several dozen receipts connected with Davidson’s important collection of Scottish art.  Some of these receipts refer directly to works now in the Hunterian Art Gallery at the University of Glasgow, but they have wider importance as evidence of the artists that Davidson favoured, the prices he paid, and the dealers he used.

The archive contains several Mackintosh-related items of considerable importance, including an autograph letter from Mackintosh to Mrs William Davidson that evidences his early sense of independence – and isolation – as an artist. Also of interest are many photographs of members of the Davidson family outside Windyhill and photographs of the interior of Gladsmuir. A group of letters from Margaret MacDonald to Mrs Davidson offers glimpses into the Mackintoshes’ domestic life, while an account book documents expenses in connection with furniture commissions in Glasgow and continental Europe.

The University of Glasgow was particularly keen to acquire this archive because Davidson is regarded not only as an absolutely central figure in the preservation and promotion of Mackintosh’s work, but also in the development of the University of Glasgow Hunterian’s own Mackintosh Collection.  It was Davidson who bought the Mackintoshes’ former house at 78 Southpark Avenue in 1920, and in 1933 he organised the Memorial Exhibition of the couple’s work after the death of Margaret Macdonald Mackintosh. His sons gave the contents of 78 Southpark Avenue to the University, making possible the eventual reconstruction of the Mackintosh House. They subsequently made other important donations to the Hunterian.

Once the collection has been rehoused and catalogued, we are anticipating that the archive will have significant potential for use in the University for teaching and learning, as well as being of great interest to a broad spectrum of researchers. 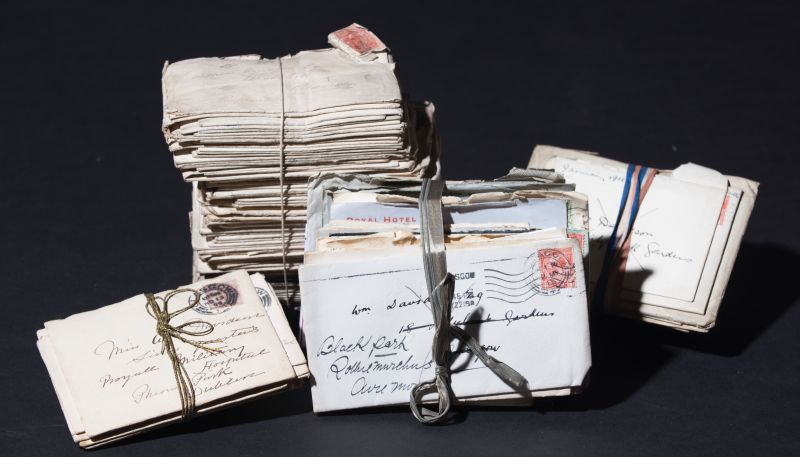 A bundle of letters from the William Davidson Family Archive. Courtesy of the University of Glasgow