The Trustees of the Cowper and Newton Museum learnt of the sale of this important letter just weeks before the auction. We were most grateful to the Friends of National Libraries for responding so quickly to a request for funds to enable us to bid. We suspected the letter would go to the United States if the Museum did not try to acquire it. FNL kindly guaranteed 60% of the auction price up to a maximum of £2,000. The William Delafield Charitable Trust contributed £500, as did a generous local donor.

The letter is part of a sequence of correspondence with Hayley, written from Cowper’s house at Weston Underwood near Olney. Cowper was then sixty. In March 1792 Hayley wrote to introduce himself. Both men had been commissioned by rival publishers to work on John Milton. Thanks to the success of The Task, published in 1785, Cowper’s poetry was well known, and so too his melancholy and his rural lifestyle. Cowper had already had several breakdowns, and was nursed back to health by his companion Mary Unwin. Hayley too loved solitude, and signed himself Hermit. But unlike Cowper, who was always short of money, Hayley was a patron of the arts with considerable inherited wealth. He had a magnificent library at his house in Eartham near Chichester. In May 1792 Hayley came to Weston to meet Cowper for the first time. Their friendship was immediate.  In August Cowper and Mrs Unwin, suffering the effects of a stroke, set off for Eartham accompanied by Cowper’s great-nephew Johnny. They spent six weeks there. It was the only time in 30 years that Cowper left home, before his final journey to Norfolk where he died in 1800.

The friendship, as this newly acquired letter makes clear, brought Cowper huge pleasure, ‘I not only love you but am proud of you as of a conquest made in my old age’ he writes. The letter is typically Cowper, chatty, lively, occasionally melancholic, and full of references to friends, including to Charlotte Smith, George Romney, Cowper’s intended patron Edward Thurlow, and also to Mary and to Hayley’s adored son Tom. Of Charlotte Smith he writes ‘her civilities and attentions to my poor Mary shall never be forgotten either by her or by me’. Cowper looks forward to the arrival of Romney’s portrait of Hayley (which eventually arrived the following January), and shares with Hayley his dislike of Samuel Johnson, ‘that literary Cossack’, and his strictures on Milton.

Parts of the letter have been published before but never in full. The same purchase included two letters written by Hayley to Cowper, dated 8 and 11 October 1792, in poor condition. After Cowper’s death, Hayley became Cowper’s biographer; the first edition of his Life of Cowper appeared in December 1802. Hayley incorporated many of Cowper’s letters, including parts of this one. The biography was an immense financial success. But by 1809, the title had changed from The Life and Posthumous Writings of William Cowper’ to The Life and Letters…’ illustrating the interest in Cowper’s letter writing.

The letter will go on display in the museum from February 2020, and in the longer term will go to the Centre for Buckinghamshire Studies in Aylesbury to join the Museum’s manuscript collection. 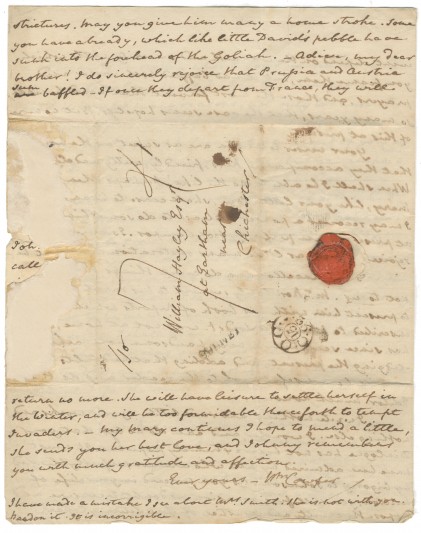 Cowper's letter to William Hayley. Courtesy of the Cowper and Newton Museum.