The Op 21 set is made up of the following songs:

The selection reflects the breadth of Parry’s reading.  He was a voracious reader, keeping lists of his reading at the end of his diaries and this gave him the texts for over 100 songs which he wrote throughout his life.  They complement our holdings of Parry’s larger scale choral settings including his Scenes from Shelley’s “Prometheus Unbound” (RCM MS 4212) and his Coronation Anthem I was glad (RCM MS 4244).

The songs were written in 1873, the year after his marriage, and are dedicated to Aeneas Ranald McDonnell, who was his business partner at Lloyd’s Register of Shipping at the time.  Although the texts led Parry to compose them in a mock-archaic style they illustrate Parry’s growing maturity.  Musically 1873 was turning point for Parry as it was the year he first met the pianist Edward Dannreuther with whom he went on to study piano.  Through Dannreuther Parry heard and played new music from across Europe and met many great performers and composers, he also supported Parry’s development as a composer.

Since acquiring the manuscript, it has been scanned and accessioned (shelfmark:  MS 21027).  It is now available to consult in the Royal College of Music Library’s reading room, the Donaldson Room.  The manuscript will be used to help introduce students to repertoire of which they are unaware.  The scans will be added to the Internet Archive in 2020.  The Royal College of Music would like to thank the FNL for its generous support.

A Sea Dirge "Full fathom five" from Shakespeare’s The Tempest 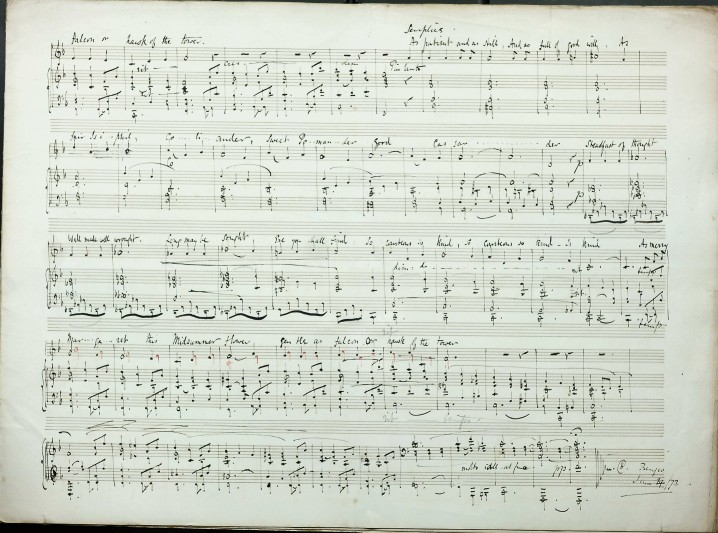 MS 212027 A Garland. Images courtesy of Royal College of Music.