A Charter of the 2nd Earl of Warwick

In November 2019 Warwickshire County Record Office (WCRO) was able to secure a medieval charter dating to the 2nd Earl of Warwick’s incumbency due, in large part, to help given by the Friends of The National Libraries.

WCRO were keen to pursue this particular document, not only because of its content, but also because we hold two collections to which this charter relates, the Warwick Castle Collection and the Parish Church of St Mary’s, Warwick.

The following describes the charter:

“Grant in alms by Roger [2nd] Earl of Warwick to Master John of £4 10s annually from the rents of the Borough of Warwick, land from Longbridge, which he held in fief; 4d, which John used to pay rent for his house; and the right to hold a manorial court.  Witnessed by Gundrada, wife of the earl; William Giffard, Henry Dapifer; Baldwin and William, deans; Walter and Jordan, chaplains; Richard, canon, Master Eustace; Everard, priest (prebyter); Roger and Ro(d)bert, priests, (sacerdotes); Roger, deacon; Nigel of St Mary; Robert, clerk; and William of Arden. Seal missing.”

Earl Roger (1119-1153) was deemed rather a failure during and after his lifetime, in part as a consequence of his surrendering Warwick Castle to the custodianship of the crown at the end of his incumbency; a particularly humiliating state of affairs from the point of view of a society where success was measured by military strength.  On the other hand, he has a reputation of having given generously to various church foundations, favouring above all the collegiate church of St Mary’s, Warwick (it is thought this is the most likely place of his burial).

The charter is known to us as it is included in the medieval St Mary’s cartulary at The National Archives (King’s Remembrancer, Exchequer, ref.  E164/22) and is consequently in an edited publication by Charles Fonge, The Cartulary of St Mary’s Collegiate Church, Warwick.  It also appears as a 17th-century copy in a volume of copy charters and other documents relating to Warwick known as "The Black Book at Woodcote", held here as part of the Waller Collection, reference CR 26/4.  We also have reference to it in the Dugdale publication, The Newburgh Earldom of Warwick and its Charters, 1088-1253, edited by David Crouch and introduced by Richard Dace.

Interestingly, the charter is not referred to in Humphrey Wanley’s Catalogi librorum manuscriptorum Angliae, 1697: Ecclesiae S Mariae apud Warwicum; perhaps it had already been ‘lost’ by the time Wanley visited the muniments at Warwick in 1691.  But its inclusion in the cartulary mentioned above denotes that it was once part of the muniments of St Mary’s; a part of the collection now long since dispersed.

St Mary's Parish (once Collegiate) Church, is a significant historic organisation in Warwick and its archive a valuably rich source of information, as is, in equal measure, that of the archive of the Earls of Warwick (which has a county, national and international appeal).  These institutions were bound together through foundation and allegiance, hence the charter enhances our understanding of the relationship between the Earls of Warwick and St Mary's. 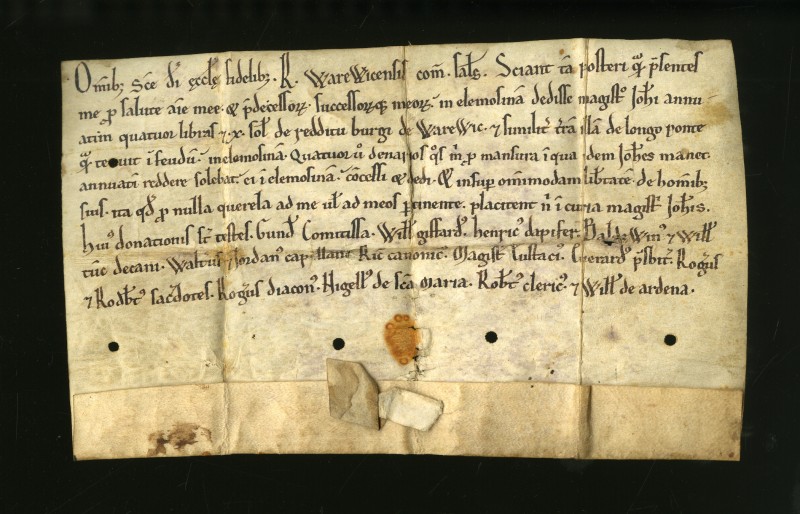 A Charter of the 2nd Earl of Warwick, c.1130-53. Courtesy of Warwickshire County Record Office.