This diary is written over the course of a year - beginning Sunday, January 4th and ending Thursday, December 31st 1846. The author records small snippets of his days, sometimes mentioning the sermons he hears and people he sees; he also indulges himself in gossip - including the 'unthankful news' that 'Barnaby it appears is living with some prostitute or other ', and castigates himself for his bad habits, particularly 'extravagance' and 'love of bed.' He is also fond of a good time: on the 6th February he writes 'this evening, Friday ...drove to Chinsford Ball ... about 50 couples were present, we kept up dancing until nearly 7 o'clock. I had one or two very pleasant partners. We breakfasted about 8, could not get Mr L.B. off without having two bottles of egged sherry, reached home about 1/2 past 12 but little fit to business, was very good to get between the sheets again.' On Valentine's Day he summons up the courage to send three cards by post, but by the 25th seems to have forgotten all about the recipients, writing, 'I was summoned to a dance at Mr C's where I met the most fascinating Little creature I have seen for some time .. .' He recounts several coach accidents that have befallen friends and acquaintances – including his employer Mr Colebrook, who on March 18th was 'thrown from the gig going from Lewes to Brighton ... face very much bruised but no bones broken, what an uncertain world we Live in'. During the summer months he is often occupied by cricket and is especially interested the Kent/Sussex matches.

Altogether the diaries offer a fascinating and detailed insight into the working and social life and opinions of this mid-Victorian provincial figure - everything from the slang he uses and his perceived shortcomings to his earnest quest for love. West Sussex Record Office is delighted that with the help of the Friends we have been able to add this vivid record of local life to our collections. 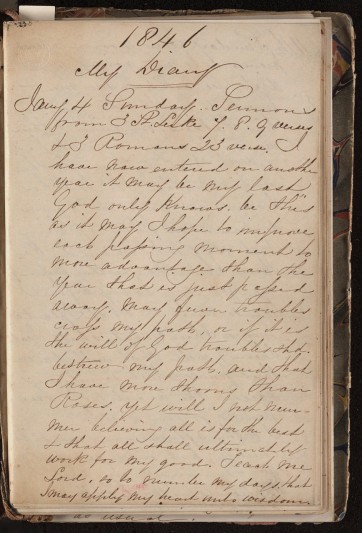 The first page of the diary. Courtesy of West Sussex Record Office.