The Institution of Civil Engineers was lucky to be able to purchase six signed drawings at an auction at Bonhams Knightsbridge in with a grant for half the amount from the Friends of National Libraries. Before bidding we contacted Lancashire Record Office who did not plan to bid and on the day we had no competition.

The drawings had survived in a chest in a Lancaster house for nearly 200 years, perhaps coming from one of the lawyers involved with the company. John Rennie was one of the leading engineers of the late 18th century, practicing before the institution was established. He began his carrier as a millwright and the Lancaster Canal was his first major civil engineering project giving these drawings added significance.

We were eager to bid for these drawings as to the best of our knowledge the drawings are not in any public record office and they complement material presented by the Rennie family some years ago. We have both John and Sir John Rennie’s report books including one volume specifically relating to the Lancaster Canal. We also have a volume of specifications relating to the canal.   Although we have a number of prints of engineering works which belonged to the family there are only a few drawings and no original drawings of his canal schemes. It is ICE policy to collect drawings representative of the full range of works carried out by the profession historically.

The drawings show proposed structures to be built on the canal and are dated 1794.  They are all signed by Rennie and the contractor, either John Pinkerton, or William Ross. John Pinkerton, was one of the most successful of the early contractors.  The Keer aqueduct, see photo, survives as a listed structure and is typical of the small span aqueduct bridges on the canal. 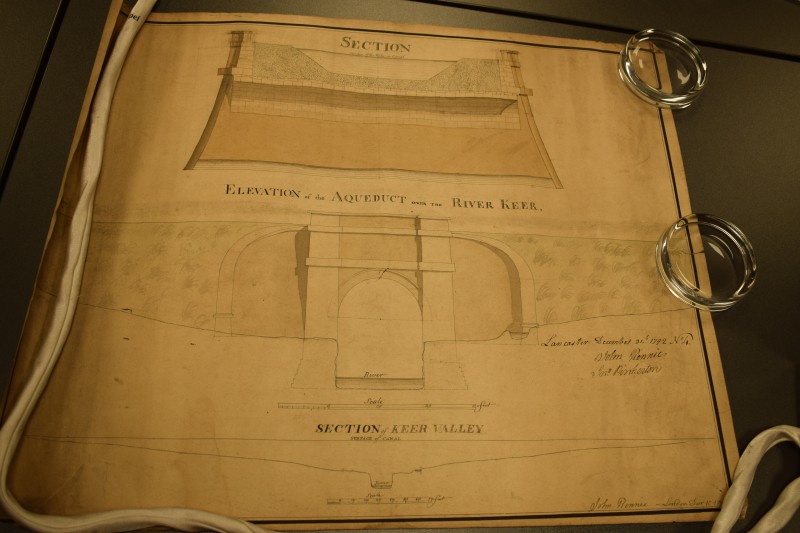 One of Rennie's drawings. Courtesy of the Institution of Civil Engineers.