This is Magdalen College Library's most significant purchase in recent decades, a volume containing all the major works of the English lutenist and composer John Dowland (1563?–1626), namely:

The Firste Booke of Songes or Ayres of Foure Partes with Tableture for the Lute (London: Peter Short, the assign of Thomas Morley, 1600);

The Second Booke of Songs or Ayres of 2. 4. 5. Parts with Tableture for the Lute or Orpherian, with the Violl de Gamba (London: Thomas Este, the assign of Thomas Morley, for George Eastland, 1600);

The Third and Last Books of Songs or Aires Newly Composed to Sing to the Lute, Orpharion or Viols (London: Peter Short, the assign of Thomas Morley, for Thomas Adams, 1603); and

Lachrimae or Seaven Teares Figured in Seaven Passionate Pavans, with Diverse Other Pavans, Galiards and Almands, Set Forth for the Lute, Viols, or Violons in Five Parts (London: John Windet for the author, 1604).

The volume was originally owned by Sir Charles Somerset (1587/8–1665), music collector, friend of Prince Henry Frederick (1594 –1612) and alumnus of Magdalen College. His close connections to the College give additional lustre to this acquisition.

The physical volume, which is in excellent condition, is interesting in itself, a tour de force of early seventeenth-century music printing, often with four parts set in different directions to allow four players or singers around a table to read their parts. The binding, with Charles Somerset’s initials in gold on the upper cover, is an exceptionally supple one that allows this table book to lie flat when it is being used.

The acquistion was made possible thanks to a substantial additional grant awarded by the B H Breslauer Foundation. 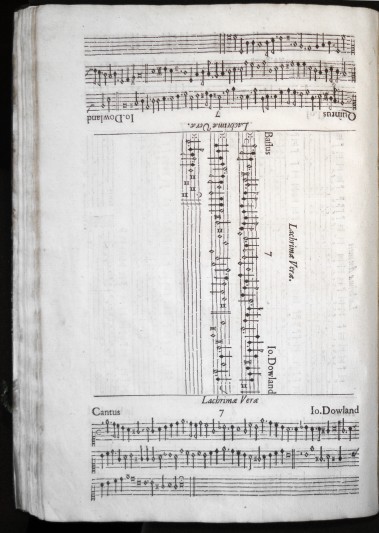 Page of music from the Lachrimae, showing the alto and tenor parts, as well as tablature for the lute.