Grant of the manor of Smewyns, White Waltham, Berkshire, to John Norreys of Bray, 1558.

The grant of the manor of Smewyns was made by the Crown to Sir John Norreys on 1 August 1558.  It is written in ink on a single membrane of parchment and measures 475mm high by 687mm wide.  The initial portrait letter shows Philip and Mary enthroned while there is additional decoration within and above a majuscule first line.  Sadly, the monarchs’ Great Seal is only a quarter fragment, although the cords on which the fragment rests are in fine condition.  The parchment membrane is intact and wholly legible, with a small amount of infill repair on the right-hand edge.  The grant had been mounted on an acidic card but this has now been removed.

Sir John Norreys was born at Fifield House in Bray, Berkshire, at the beginning of the 16th century.  He held a number of offices in the Tudor court and in 1558 was Chief Usher of the Privy Chamber.  Smewyns was sold to him for a little over £173 as part of the crown land sales designed to replenish the Marian Exchequer.  Sir John retired from court life after the succession of Elizabeth and died at Fifield in 1577.

The grant is an attractive document and also provides rare evidence for this small manor.  The physical manifestation of Smewyns is long gone, with parts of a medieval moat being the only trace of the original settlement.  There are also very few surviving documents for Smewyns and no others at the Berkshire Record Office.  It is possible that, although some details are noted in Harley MSS 608, the grant provides the only full description of the manor’s extent.

The provenance of the grant is well-established: the Victoria County History of Berkshire recalls how Smewyns left Norreys family ownership in 1621 and passed through a number of hands before being purchased by Robert Vansittart in 1716.  By this date it formed part of the larger estate of Shottesbrooke Park.  The Vansittarts, a family of London merchants, made Shottesbrooke their home and regularly supplied Berkshire MPs during the 18th and 19th centuries; the present owners of Shottesbrooke, the Smiths, are their descendants by marriage.  A member of the Smiths deposited the grant in the Record Office in 1950 but it was later withdrawn and framed to hang at Shottesbrooke.  Some 45 years later it is a great pleasure to restore it to our collections. 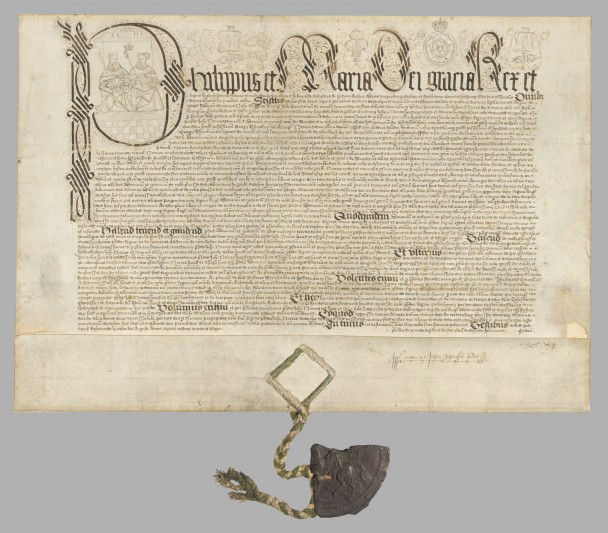 Grant of the Manor of Smewyns, 1558. Courtesy of Christie's.