The Hulton of Hulton Archive

The Hulton of Hulton family and estate archive, while relating chiefly to the Bolton and Salford area of the former County Palatine of Lancaster, is also of regional and national importance. It dates from1199 to1947 and comprises over 100 boxes and trunks of documents, correspondence and papers, a good series of estate and colliery plans and a major collection of mediaeval deeds and other material, including the only known surviving document relating to the Augustinian priory at Cartmel in Cumbria.

The Hultons were among the leading gentry families in North West England, tracing their lineage back to the twelfth century. Many of them held public office in Lancashire, demonstrating a continuing service to the local and regional community. The collection was deposited at Lancashire Record Office in 1943. The direct family line ended with the death of Sir Geoffrey Hulton, in 1993 and ownership passed to a nephew who, having added material to the deposited collection, decided in 2013 to offer it for sale, giving Lancashire Archive first refusal.

As a family and estate collection, the Hulton archive records the lives and work of individuals from the highest standing in society to the most humble. It documents key aspects of Lancashire's social and economic history, including farming and estate management, rural social relations, the beginnings and progress of the industrial revolution, the interactions of landownership and commercial development, the administration of justice, the operation of the Old Poor Law and local and Loyalist politics.

The local and regional role of the Hultons was complemented by their wider significance. Through their marriages, their business and political activities and their official duties, they achieved a greater prominence. William Hulton (1625-1694) married the only daughter of William Jessop, clerk to the Council of State and to the House of Commons during the Restoration period, whose correspondence includes many contemporary references to, for example, the Great Plague and the Great Fire of London. William Hulton (1787-1864) achieved fame, or notoriety, for ordering the cavalry to charge at Peterloo in 1819. He also developed commercial enterprises, notably the prosperous family coal mines, and engaged George Stephenson to provide a rail connection in the Bolton and Leigh Railway.

Details of the archive are available on Lancashire Archives online catalogue, LANCAT. 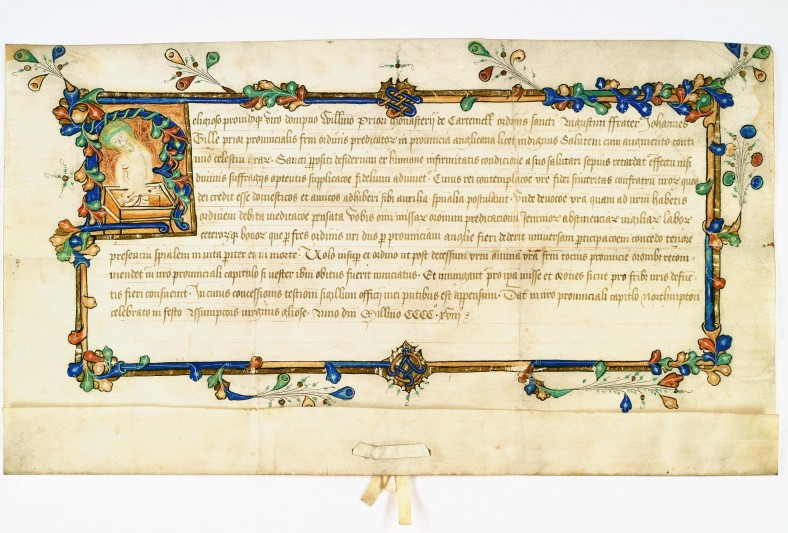 Illuminated mandate of John Till, Prior Provincial of the Order of Dominicans in England.