Prior to its acquisition by the Keats-Shelley Memorial Association, John Keats’s letter to Thomas Monkhouse, dated 21 June 1818, had always been in private hands and hardly ever seen by scholars. It had, however, previously been loaned to the British Library, where copies were made. It was first published in the Times Literary Supplement in 1937, and again in Hyder Edward Rollins’s 1958 edition of The Letters of John Keats. The letter passed down through generations of the Hutchinson family – descendants of Thomas Monkhouse’s cousin Mary Hutchinson, who was also married to William Wordsworth – before eventually being inherited by Romantic scholar Jonathan Wordsworth and later sold at auction by Sotheby’s on 30 June 1982, when it was bought by a Mr Jeffreys. When Christie’s in New York got in touch with the Keats-Shelley House in December 2017 to alert us to its possible upcoming sale we were immediately interested. Christie’s contacted us again in 2018, and this time offered first refusal on its purchase. Some weeks of discussion amongst our Acquisitions Sub-committee, Trustees, and new Chair ensued, before it was decided to acquire the letter for the collection of the House at the negotiated price of $168,000 (£131,000).

1818 was quite a year for Keats. He lost both his brothers – one to transatlantic migration and the other to tuberculosis – and met the love of his life Fanny Brawne. It was also the year he published his major poem Endymion. In the middle of it all stands this letter, penned the very day before Keats set off on his walking tour of the North of England and Scotland, a trip that would inspire him to write a dozen or so poems and include an attempt to visit his hero Wordsworth in the Lake District. The resultant letter is short but fascinating in the context of Keats’s life, not least because its recipient is Monkhouse, who had attended the so-called ‘Immortal Dinner’ in December 1817 with Keats, Wordsworth, and other literary and artistic luminaries of the day. The text – in which the ‘Poem’ referred to is Endymion – reads as follows:

My Dear Sir, I regret not being at home when you called the other day - the more because I shall set out tomorrow morning for the North. I was very much gratified to hear from [Benjamin Robert] Haydon that you so great a Lover of Wordsworth should be pleased with any part of my Poem. In hopes of seeing you soon after my return and speaking of my visit to Rydal, I remain, Yours very truly, John Keats.

Sales of Keats autograph manuscripts are extremely scarce. The last manuscript in Keats’s hand publicly sold was a fragment from his poem ‘I stood tiptoe upon a little hill’, which went for £181,250 at auction in 2013. Keats letters also come up for sale only very rarely, with so few remaining in private collections. At £131,000 Keats’s apologetic note to Monkhouse became the most expensive Keats letter ever sold, though it would likely have fetched a far higher price had it gone through the rigmarole of bidding at auction, which would almost certainly have left the Keats-Shelley Memorial Association disappointed and defeated by a private collector. As such we are thrilled that this most precious acquisition has become the second letter in Keats’s hand in our collection, joining another apology letter which also dates from June 1818 and in which Keats writes to his friend Joseph Severn to excuse himself for cancelling lunch, due to a sudden illness. And we express heartfelt thanks to the Friends of the National Libraries – who supported us on three previous important occasions – as well as a number of other donors, Trustees, and Friends of the Keats-Shelley Memorial Association, who provided invaluable financial support for the acquisition. 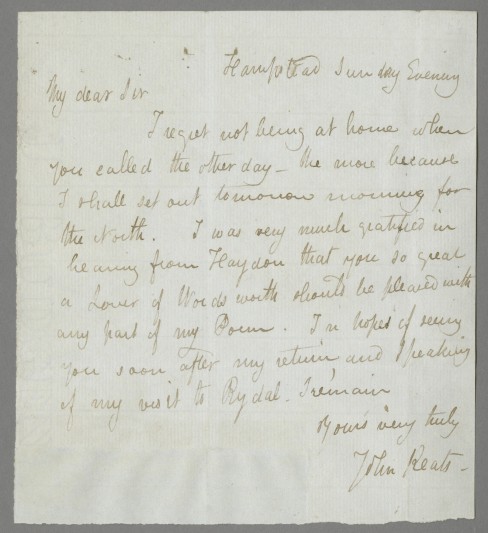