John Keats, Lamia, Isabella, the Eve of St Agnes and other poems

Winchester has a special connection with John Keats, who spent two months in the city in the summer and autumn of 1819. He arrived in early August from the Isle of Wight, reporting to a friend in London, ‘We removed to Winchester for the convenience of a Library and find it an exceeding pleasant Town’. Although Keats does not seem to have made use of any library in Winchester, he remained until October. The history of the city and the beauty of the surrounding countryside made a deep impression on him. In Winchester, he wrote the ode ‘To Autumn’, completed ‘Lamia’ and worked on ‘Hyperion’, as well as writing some of his most eloquent and revealing letters. In one of these, Keats describes a regular evening walk from his lodgings near the Cathedral to the fields and water meadows by Winchester College. The Fellows’ Library lies on the route of this walk, within the landscape from which Keats drew inspiration. We are therefore delighted to have acquired this fine copy of the author’s third and last collection, in which some of the greatest poems in the English language first appeared.

The acquisition of this volume builds on two areas of existing strength in the College’s collections. Firstly, there are many items relating to Winchester at the time of Keats’ visit. These include early guidebooks to the city and dozens of watercolour views by two local artists: George Sidney Shepherd (1784-1862) and Richard Baigent (1799-1881). Secondly, the holdings of the Fellows’ Library are of considerable importance for understanding the development of literary Romanticism. The collection includes a large body of manuscript material by Joseph Warton (1722-1800) and Thomas Warton (1728-1790), whose poetry and criticism emphasised feeling and imagination. There are rich holdings of works by authors educated at Winchester, including Edward Young, William Collins and Thomas Lisle Bowles, each of whom influenced the Romantic poets. The College archives include hundreds of poems written by pupils in the decades around 1800, which show the influence of wider literary trends.

Our copy of Keats’ poems went on public display almost immediately after its purchase. In the autumn of 2019, it featured in an exhibition in the College museum commemorating the bicentenary of Keats’ visit to Winchester, which was open free of charge every afternoon and seen by over 3,000 visitors. The exhibition coincided with a programme of lectures and a workshop for sixth-formers at local schools. Keats’ poems now feature as part of the outreach activities run by Winchester’s English Department, which allow visiting pupils to learn about great works of literature as they originally appeared. 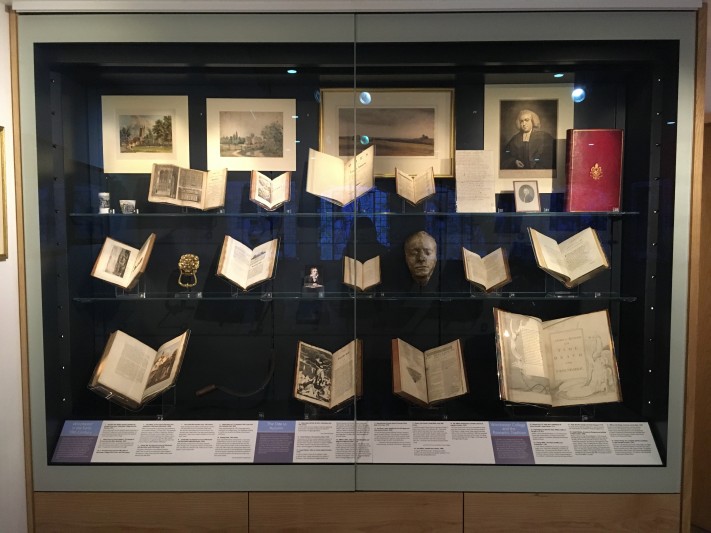 Part of the exhibition ‘Keats in Winchester’, held at Winchester College in the autumn of 2019 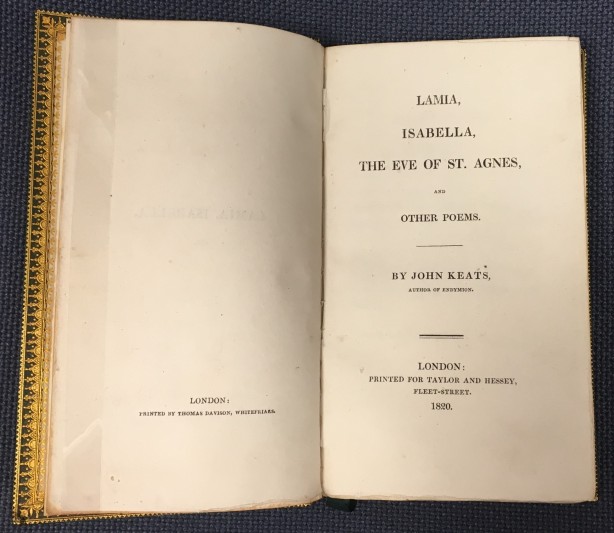 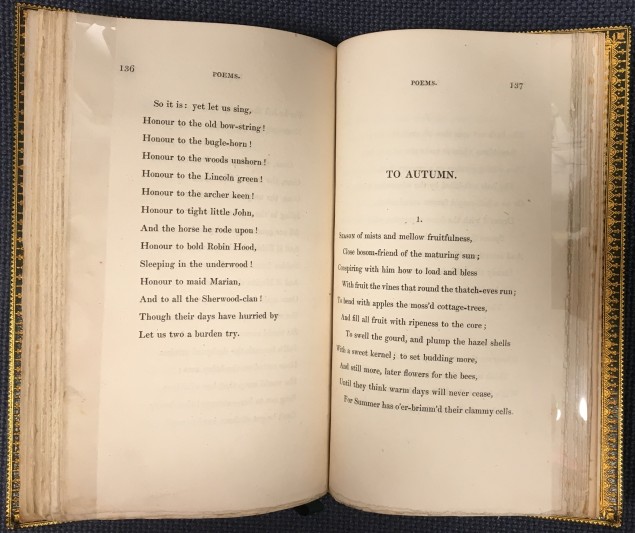 The opening of ‘To Autumn’. Images courtesy of the Warden and Scholars of Winchester College.