This worn Penguin paperback provides a fascinating insight into legal and publishing history in this country.  It paved the way for social reform far beyond D. H. Lawrence’s colourful text.

A test case of the Obscene Publications Act 1959, initiated by Penguin Books, was presided over by Mr Justice Byrne in 1960.  Assisted by his wife, Byrne used this annotated copy of the novel together with page references and further notes made during the trial.  The role of Mrs Byrne, including crafting a small damask bag to discreetly transport the book to court, provides a glimpse of life in the 1950s.

The Old Bailey trial of Regina v. Penguin Books Ltd. found that the book was not obscene, thus marking the end of the conservative 1950s. Scholars suggest this outcome led to a new liberal and permissive society and the modernisation of legalisation for homosexuality, abortion, the death penalty and divorce in the 1960s and beyond.

This book was auctioned by Sotheby’s in October 2018 and purchased by a US resident.  The Reviewing Committee on the Export of Works of Art and Objects of Cultural Interest (RCEWA) recommended that the export of the book from the UK would be a misfortune because of its “close connection to our history and national life”. The Arts Minister ordered a temporary export deferral on the book and the government initiated a process to find a UK institution willing to house this artefact and match the auction price.

Several institutions and individuals bid through the “Serious Expression of Interest” process facilitated by the RCEWA to match the purchase price and to keep the book in the UK.  The University of Bristol Library, the home to the Penguin Archive, was successful in the bid to house Byrne’s book. Bristol’s collections include Allen Lane’s personal papers, notes and correspondence relating to the 1960 case in addition to editorial files and proof versions of the

At the same time English PEN, a writers’ association, initiated a crowdsourcing campaign to save the book. The campaign was supported by writers, including Neil Gaiman, Amanda Palmer and Stephen Fry - who tweeted that the book was an “enticing and important object” that should stay in the UK. Major contributors to the crowdsourcing initiative were Penguin Random House and the T. S. Eliot Foundation.

In addition to the crowdsourced funds, Bristol was able to match the original auction price through the assistance of Friends of the National Libraries, the Penguin Collectors’ Society and Elizabeth Lane, daughter of the late Richard Lane of Penguin Books, alumni and supporters of the university.

This famous book now supports the University’s creative, scholarly and social outcomes. It will be a centrepiece in a new University Library planned to provide specialist research facilities, galleries and public event spaces. 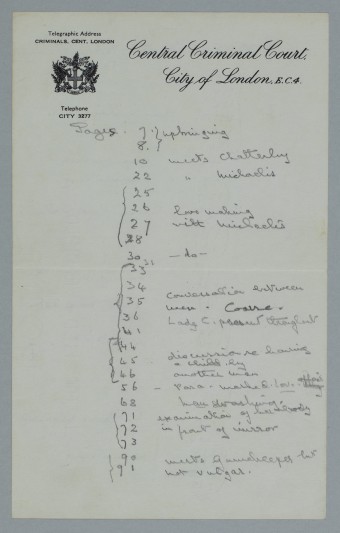 A page of Mrs Byrne's notes. Images courtesy of the University of Bristol.