Cambridge University Library has acquired this exceptionally rare book of Orthodox liturgy and theology in Old Church Slavonic, thanks to a generous grant from the Friends of the National Libraries. It is an exciting addition to the collection of early Slavonic books found across collegiate Cambridge. It contains 31 chapters covering all aspects of the Orthodox tradition, including polemical treatises against heretics, Catholics, and traitors to the Orthodox faith. Much of the content is derived from the earlier writings of Zakhariia Kopystens’kyi, Archimandrite of the Kyiv-Pechersk Monastery, which discuss the state of religion and belief in Orthodox Eastern Europe, the differences between the Eastern and Western churches, the significance of icons, apostolic power, churches, the role of the Patriarch, and more. The publication was sanctioned by the Orthodox Church and printed by Stefan Boniface (Stefan Vonifat’ev), a prominent protopope.

The book was published in febrile times for the Russian Orthodox Church, only a few years before the great Raskol (schism) caused re-alignment by the official church of practices with their Greek roots, a change which saw the emergence of the Old Believers movement. The fact that this book, which contains a synthesis emerging out of the encounter between Orthodoxy and Latin (Jesuit) education in the Polish-Lithuanian Commonwealth, appeared just as this restoration of practices rooted in the Greek tradition was gaining speed might explain why so few copies remain. This is one of only six recorded copies worldwide.

The Cambridge copy contains two statements of ownership. The inside cover records the purchase by a near-contemporary owner, Christian Christianov, son of Hoppe, in 1675. A theology and philosophy student in the city, Christianov identifies himself as an inozemets (foreigner) from Beeskow in Lusatia, an area now in Germany and Poland. The other provenance statement is recorded on successive recto pages, in the bottom margin. It records ownership by a clergyman called Iiakov (Jacob), possibly the very first owner of the book. We are continuing to work on closer identification of both individuals. The book was later part of the Macclesfield Library at Shirburn Castle in Oxfordshire, with the Castle blind-stamp to the first and last three leaves of text, and manuscript shelf marks to the front pastedown.

The copy entered the Macclesfield Library at an early point (probably the late 17th century), where it shared space with other items of early Slavonic printing. The binding is of contemporary full calf over wooden boards with brass clasps. The upper board is decorated with blind-tooled floral roll borders to a panel design, tooled centre piece of a unicorn trampling a ram in central panel with traces of gilt, and Slavonic lettered panels ‘Kniga Gl[agol]emaia’ (‘This book is called’) above and below. The lower board is blind-tooled with geometric roll tools to a panel design. The contemporary binding was certainly interesting enough to be retained on arrival to Macclesfield, rather than discarded in favour of a binding of English design. 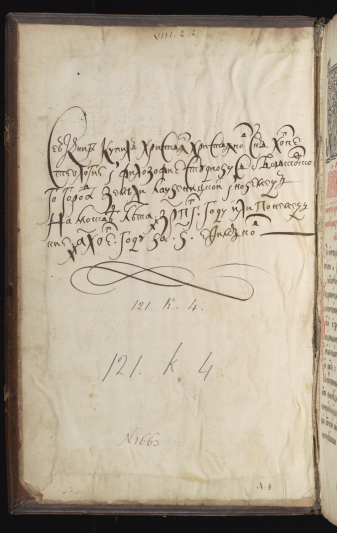 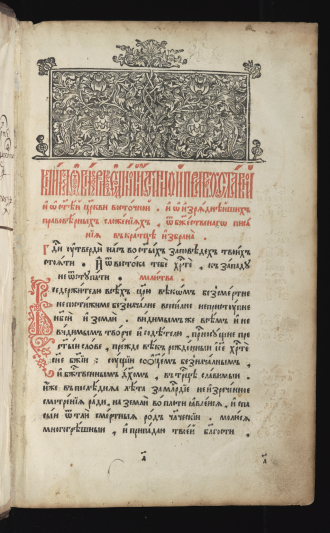 A page from the volume, and (top) the inside front cover with Christianov's intricate ownership note. Courtesy of the Syndics of Cambridge University Library.