Cambridge University Library is very grateful for a grant from the Friends of the National Libraries’ Breslauer Fund, which enabled us to acquire an exceptionally rare artist’s book in a contemporary cuir japonais binding, demonstrating the late 19th-century fashion for all things Japanese.

The text is a review by the Parisian art critic Claude Eliot of the ‘Salon de 1892’, a gallery exhibition at Angers by the French Society of Friends of the Arts, the review taking the form of six humorous dialogues. The dialogues were first published in the Journal de Maine et Loire, but subsequently issued by Eliot in this very limited press run. This is one of six special copies (of a total of thirty copies, none produced for sale), each unique, featuring a distinctive binding and original artwork by members of the Société des Amis des Arts d’Angers.

The book includes 49 signed works of art decorating or inserted into the text, including 26  watercolour designs on text leaves; six plates in gouache; two watercolour plates; one folding triptych in watercolour; eight pencil or pen and ink drawings; two richly embroidered leaves of red, purple, green, blue and black threads (one on hand-made Japanese paper with hand-painted accents, the other on Japanese silk); title-page in colour; frontispiece etchings; and a portrait of the author painted by Georges Rochegrosse.

The contemporary cuir japonais binding is by Lucien Durvand (1852–1924) and features a blind-stamped collage of tasselled medallions with hand-coloured Japanese scenes (including a pagoda, the procession of a dignitary, battle scenes, and an arching bridge) and Japanese-patterned brocade endleaves in shades of jade, crimson and gold. The original paper wrappers are bound in and the book is in the original maroon folding box. Durvand was head of one of the finest workshops in Paris, established in 1890, and was awarded a silver medal for his bindings at the Universal Exhibition in 1900.

The binding and illustrations reflect the fashion for all things Japanese that swept Europe, particularly France, in the wake of the opening of Japan by Emperor Meiji in 1868. Japanese art became a major source for French artistic inspiration. The Société des Amis des Arts d'Angers held a prominent place in the cultural life of the province of Anjou and the artists who contributed to this volume include some of the most respected, such as Alexandre Defaux (1826–1900), responsible for the book’s delicate watercolour decorations; Georges Rochegrosse (1859–1938); Clement Bellenger (1851–1898), an esteemed wood engraver; Emile Noirot (1854–1924) and Mme E. Sylvestré, a pupil of Henri Regnault.

There are no other copies recorded in UK libraries; another of the six special copies can be found at the Bibliothèque municipal in Angers (in a binding by Irène Pascalidès). This acquisition complements the Library’s holdings of fine bindings, colour plate books and extra-illustrated books, as well as being a fine addition to our collections of material relating to Japan. 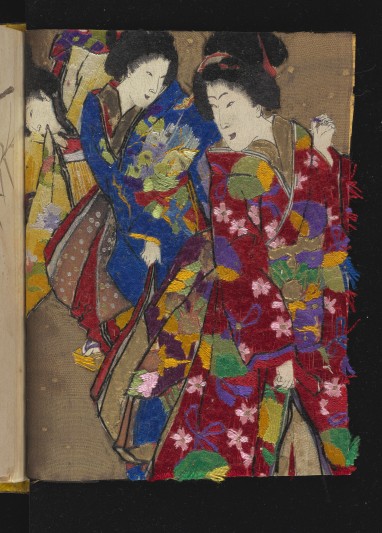 One of the 49 signed works of art in the volume. Courtesy of the Syndics of Cambridge University Library.