Dorset County Museum (DCM) is extremely grateful for the assistance provided by the Friends of the National Libraries in the purchase of this important series of letters which add detail and colour to the life and times of a significant British writer, in whom there is a resurgence of interest by academic and other researchers.  Grant aid towards this purchase was also received from the Arts Council/V&A Purchase Grant Fund and from members of the Sylvia Townsend Warner Society.

Sylvia Townsend Warner (1893-1978) spent the greater part of her life in rural Dorset with her same-sex partner Valentine Ackland.  They were committed communists who supported the Republican cause in the Spanish Civil War (describing in one letter the ‘strange, fairy-tale hospitality’ they received at a Writers’ Congress) and are studied for their political beliefs, literary output and what was, by contemporary standards, unorthodox relationship.  Warner wrote a series of novels including Lolly Willowes, Mr Fortune’s Maggot and The Corner That Held Them as well biography and poetry, some of which was co-authored with Ackland.

The principal archive of Warner and Ackland is deposited by DCM at Dorset History Centre and this additional material, the first substantial addition to the archive for many years, provides a wonderful insight into their lives and the range of social and literary connections they interacted with.  In addition, it provides interesting social and political commentary on mid-20th century Dorset, as well as illuminating the experience of women living in same-sex relationships in a rural environment during this period.  DCM is due to reopen in 2020 following a major redevelopment project. This will include four new galleries, one of which, Artists’ Dorset, will display art and literary work relating to the Chaldon Herring creative community which included Warner, the sculptor Elizabeth Muntz and members of the literary Powys family. This community, and STW’s relationship with the Powys family is described in great detail in the letters purchased with this grant.

The correspondence itself, due to the significant timespan, touches on a wide range of subject matter.  The Second World War saw Warner and Ackland act as ARP wardens and in one note she describes the local Dorset countryfolk as being ‘very queer - they give me a deeply anthropological feeling’.  They host evacuees and dig up an incendiary bomb from amongst their artichokes – and describe a precarious journey home across the Atlantic.

This newly-purchased cache of letters offers scholars and others a really interesting insight into the author, her partner and the context in which their artistic output was generated.  It is also another reminder in the digital era, of the enduring power and importance of the manuscript letter. 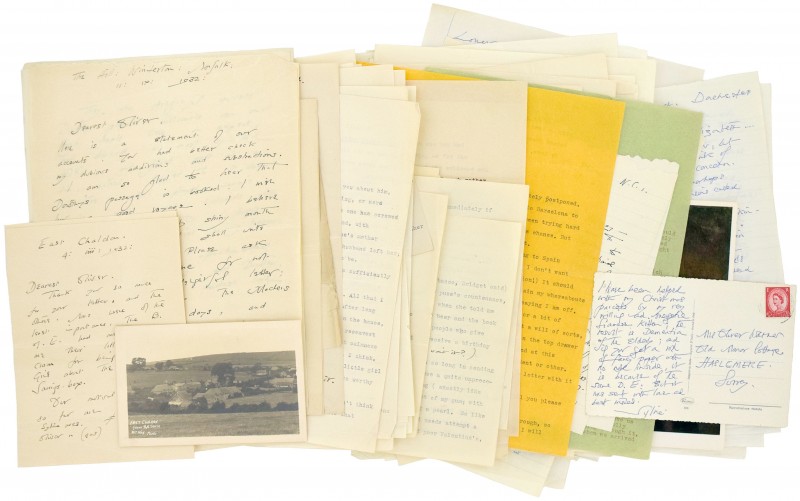 A selection of the letters.