Campion Hall, University of Oxford, is grateful for a generous grant from the Friends of the National Libraries, which has enabled it to acquire a finely bound copy of the 1931 edition of L'Ombre de la Croix by the  brothers Jérôme and Jean Tharaud, complete with all the 73 etchings by Frank Brangwyn. The copy was commissioned for the French film producer Guy Seligman, and bears his book label. It was very beautifully rebound (two volumes in one) by E and A Maylander of Paris.

The text of the book, a sympathetic study of Jewish life in contemporary Europe, was first published in 1917. In 1931, it was issued by the fine books publisher Editions Lapina in Paris, with Brangwyn's illustrations. As a benefactor and friend of the institution, Brangwyn is important to the Campion Hall collections, which he helped the then Master Martin D'Arcy SJ to form, a process documented by many letters in the Hall’s archives. The subject of the book also has a positive resonance with Campion Hall, which provided a first refuge to several Jewish families who came to Britain from Austria and Germany in the late 1930s, as did the Jesuit College at Stonyhurst.

Brangwyn’s work is at the heart of the Campion Hall collection: his set of stations of the cross, chiaroscuro lithographs onto wooden panel (1927) are the key element in the design of the Chapel, since the architect, Sir Edwin Lutyens, took the module of panelling, fenestration, and paving from them. Brangwyn also gave the Hall his high quality cast of the Bruges Madonna, with which he had been presented when he was given the freedom of Bruges (his native city), and also his own copy (in a fine 17th-century binding) of the Dürer Little Passion. The Hall also owns a number of his etchings, including a few from L'Ombre de la Croix, framed and currently hung with prints by David Jones and Eric Gill. The 73 etchings he made for L’Ombre de la Croix appear to depict the town of Belz, which in the interwar period, was part of Poland. Jews had had equal rights and duties in Belz since 1665, and by 1919, about half the population was Jewish. In the 19th century it became the home of an important Hasidic dynasty and, in consequence, a major centre for Torah study.

More detailed notes on this book may be found on the Campion Hall website (Campion Hall Art Blog), where the kindness of the Friends of the National Libraries is gratefully acknowledged. 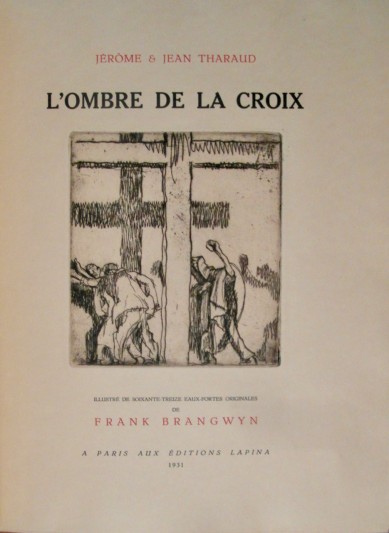 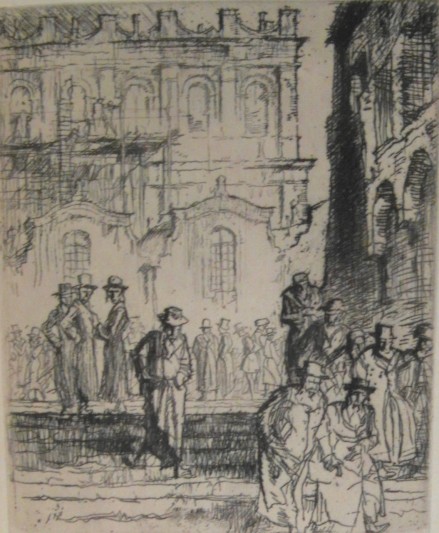 Etching of Jewish life in Belz. Images courtesy of the Estate of Frank Brangwyn and Campion Hall.