In July 2018, with support from the Friends of the National Libraries, and also from the National Heritage Memorial Fund, the Friends of Canterbury Cathedral, and a private donor, we were able to purchase for the Cathedral a medieval manuscript now known as the Lyghfield Bible (CCA-DCc/AddMs/392).

It is almost certain that the Lyghfield Bible was produced in Paris by professional scribes and illuminators in the later 13th century.  Paris was the centre of the production of 'Pocket Bibles', of which the Lyghfield Bible is a fine example. Pocket Bibles brought all of the books of the Bible into one volume of a small format, and were produced in large numbers from the later 13th century onwards. The volumes were designed for personal learning and devotion, and they were particularly convenient for scholars and travelling preachers.

The script of the Lyghfield Bible is tiny but impeccable, with its Latin written in two columns on fine vellum. Each book of the Bible begins with a tiny exquisite illumination. Overall, the volume has survived in extraordinarily good condition. The binding is not original: it is early 19th century and a good example of its type. The edges of the volume were gilded at that time.

The Bible is a highly important addition for our collections. As recorded on the flyleaf, the volume was in the possession of William Lyghfield, who was tonsured as a monk of Canterbury Cathedral in 1510. In 1538 he was described as aged 50, and ‘witty’. When the monastery was dissolved in 1540, Lyghfield was granted a pension and was given the office of a Minor Canon at the Cathedral. Very little of the Cathedral’s medieval library still survives at Canterbury. The Lyghfield Bible is the only complete Bible from the medieval book collection now at the Cathedral, and it the finest complete illuminated book from that collection held here. We purchased the Bible from the Schoyen Collection; when in that collection, it was the last complete book from the Cathedral’s medieval book collection known to remain in private hands.

As well as Lyghfield, we know that the Bible was owned by a Master Thomas Trussell. This is likely to be the 14th-century clergyman of that name who was granted the Archdeaconry of Middlesex in 1331. It is currently not clear how, and when, the book came to Canterbury. Before its return to Canterbury, the Bible had been little studied. Since its arrival here, it has been examined by local academics who are investigating its story. On 4th March 2019, the University of Kent hosted a study afternoon on the Bible, followed by a public lecture by Dr Alixe Bovey of the Courtauld Institute.

The Bible has received conservation treatment and is displayed in the new exhibition area in the Crypt. We look forward to sharing its story as it unfolds. 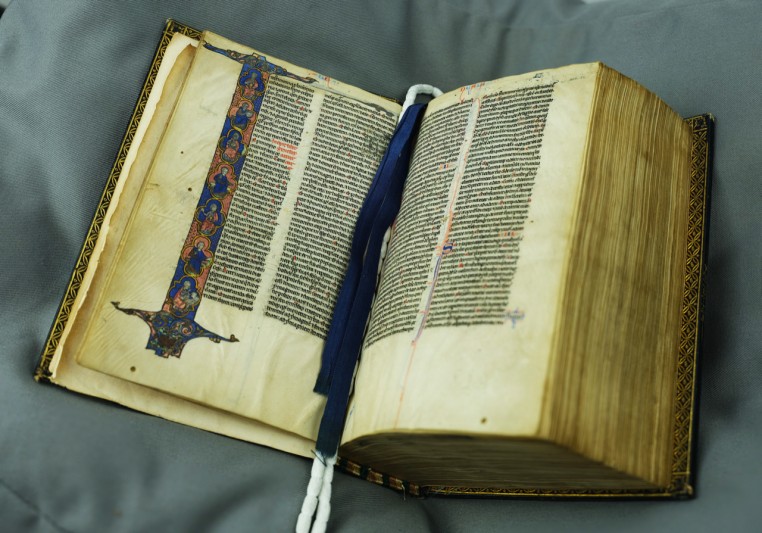 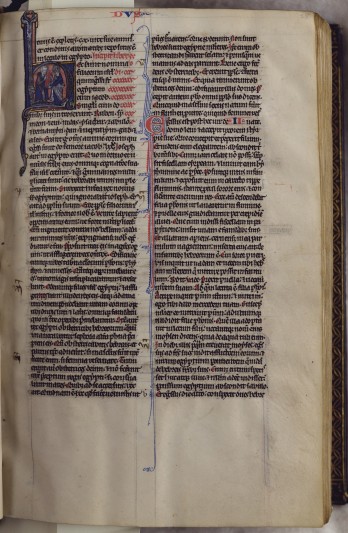 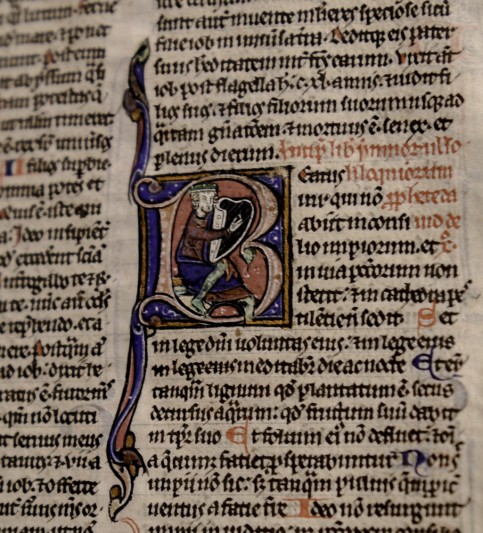