A rare and poignant autograph letter written by Austen's sister, Cassandra, in the days following the author's death. The letter is addressed to Fanny Knight, the eldest child of Cassandra’s brother Edward. It documents the anguish faced by Cassandra as she returned to Chawton from Winchester, where she had for two months been nursing her dying sister, and on its second page describes the modest funeral of Jane Austen that had taken place a few days previously. As well as being written in Chawton, in the home Jane and Cassandra shared for eight years, Cassandra’s closing comments refer to the types of memorial jewellery now in the Museum’s collection.

It is one of only three surviving letters in Cassandra’s hand to refer to Jane and is the only letter by Cassandra in a public collection in the UK. It joins the Museum's existing holdings of nine letters by Jane Austen. The letter will feature in the events being planned for the 2017 Bicentenary of Jane Austen’s death.

I have just read your letter for the third time & thank you most sincerely for every kind expression to myself & still more warmly for your praises of her who I believe was better known to you than to any human being besides myself. Nothing of the sort could have been more gratifying to me than the manner in which you write of her & if the dear Angel is conscious of what passes here & is not above all earthly feelings, she may perhaps receive pleasure in being so mourned. Had she been the survivor I can fancy her speaking of you in almost the same terms – there are certainly many points of strong resemblance in your characters – in your intimate acquaintance with each other & your mutual strong affection you were counterparts.

Thursday was not so dreadful a day to me as you imagined, there was so much necessary to be done that there was not time for additional misery. Every thing was conducted with the greatest tranquillity, & but that I was determined I would see the last & therefore was upon the listen, I should not have known when they left the House. I watched the little mournful procession the length of the Street & when it turned from my sight & I had lost her for ever – even then I was not overpowered, nor so much agitated as I am now in writing of it. – Never was human being more sincerely mourned by those who attended her remains than was this dear creature. May the sorrow with which she is parted from on earth be a prognostic of the joy with which she is hailed in Heaven! – I continue very tolerably well, much better than any one could have supposed possible, because I certainly have had considerable fatigue of body as well as anguish of mind for months back, but I really am well, & I hope I am properly grateful to the Almighty for having been so supported. Your Grandmama too is much better than when I came home. – I did not think your dear Papa appeared unwell, & I understand that he seemed much more comfortable after his return from Winchester than he had done before. I need not tell you that he was a great comfort to me – indeed I can never say enough of the kindness I have received from him & from every other friend. – I get out of doors a good deal, & am able to employ myself. Of course those employments suit me best which leave me most at leisure to think of her I have lost & I do think of her in every variety of circumstance. In our happy hours of confidential intercourse, in the chearful family party, which she so ornamented, in her sick room, on her death bed & as (I hope) an inhabitant of Heaven. Oh! If I may one day be reunited to her there! – I know the time must come when my mind will be less engrossed by her idea, but I do not like to think of it. If I think of her less as on Earth, God grant that I may never cease to reflect on her as inhabiting Heaven & never cease my humble endeavours (when it shall please God) to join her there.

In looking at a few of the precious papers which are now my property I have found some Memorandums, amongst which she desires that one of her gold chains may be given to her God-daughter Louisa & a lock of her hair be set for you. You can need no assurance my dearest Fanny that every request of your beloved Aunt will be sacred with me. Be so good as to say whether you prefer a broche or ring.

God bless you my dearest Fanny. Believe me most affectly
Yours Cass. Elizth Austen 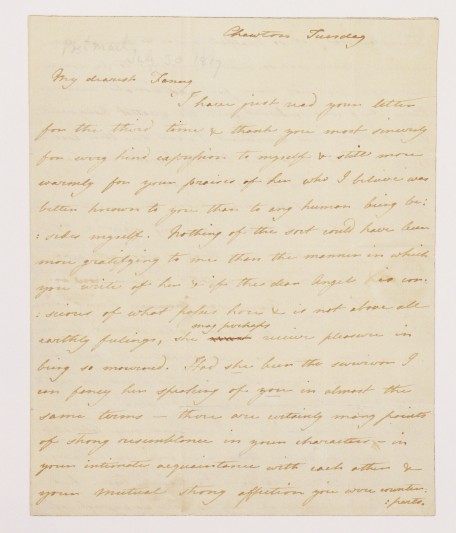