This hitherto unrecorded title from Harvey’s library contains revealing marginalia made over two reading campaigns, one dated to 1578. On the title page Harvey notes confidently that the work was ‘written by a Catholique’ and records his ownership of a French edition of this work, from among the books of his patron Thomas Smith. The textual annotations are mostly in English, providing a vivid link with the mind of an Elizabethan scholar in Cambridge (where the annotations were almost certainly made and where Harvey may have acquired the book). As such it is a unique record of an English analysis of very recent and very pressing French history. The marginalia show the strenuousness of Harvey’s attempt to draw out the political principles underlying the history, with a summary at the beginning about the various thinkers that Catherine's behaviour bears out, which concludes by suggesting that she really was making up the rules for herself. He notes that Catherine ‘intended to kill ye protestantes with kindness’ and, on her personal qualities, records that ‘she is acquainted with all fashions and knowith on which side of her bre[a]d to strike her butter’. Matters of royal protocol are also discussed—at one point he annotates a section on whether or not a monarch on the brink of death may nominate their successor (something which had occurred in England with Henry VIII only 30 years earlier).

This book provides a significant new perspective on Harvey’s engagement with contemporary political and religious events and will undoubtedly reward further study. Marginalia remains central to the increasingly popular field of book history and Harvey has been the subject of much interest since Lisa Jardine and Anthony Grafton’s seminal article ‘”Studied for action”: how Gabriel Harvey read his Livy’ (1990). Fourteen of his annotated books have recently been digitised and their marginalia studied in great detail as part of the Archaeology of Reading project (archaeologyofreading.org/), a collaborative effort between libraries and research institutions, and will soon be joined by this new acquisition, already fully digitised on the Cambridge Digital Library. This book offers a fascinating opportunity to extend our conversations about what reading has meant in the past, and what it means today. 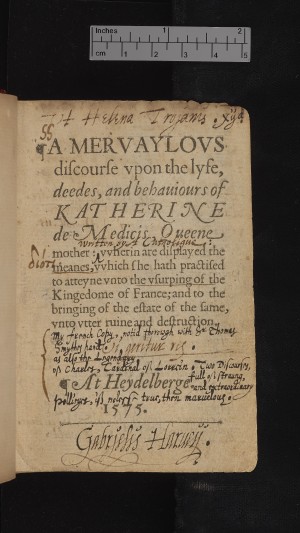 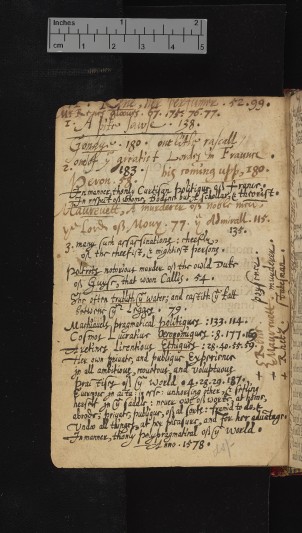 Harvey’s list of contents on the title page verso and the date of reading, 1578, in lower margin. Courtesy of the Syndics of Cambridge University Library.