Recently bought by Durham University Library Archives and Special Collections with the help of the Friends, this volume now has the reference SB 2537. This comprises two works: The New Testament of our Lord and Saviour Jesus Christ. Newly translated out of the originall Greek: and with the former translations diligently compared and revised, by his Majesties speciall commandment, imprinted at London by Robert Barker, printer to the Kings most excellent Majestie, and by the assignes of John Bill, 1640; bound in the same volume is The Whole booke of Psalmes collected into English meter by Tho. Sternhold, John Hopkins, W. Whittingham and others, printed in London for the Company of Stationers, 1641.

Both volumes are worthy additions to the collections in their own right, but it is the binding of the two together that really sets them apart as a stunning example of the genre. This binding is in 17th-century English needlework, the sides and back being decorated with a floral pattern worked in coloured silks, silver wire and spangles on a background of white satin. On the front cover a central large lily in a pot is depicted in stump-work with smaller flowers and leaves below and two insects above. The top petals of the lily can be folded back to show the petals behind. A different central flower is on the back cover. The colours are not faded and the back cover is especially fresh. The spine has four compartments, with flowers and leaves and includes one spangle with a central seed pearl still in place. The edges of the leaves are gilded and gauffered with red and blue ovals. There are remains of pink silk ties and the whole is now in a red cloth drop-box (20th century). The bookplate of the collector Robert S. Pirie (1934-2015) is inside the front cover of the box; it was previously auctioned at Sotheby's sale of Pirie's books in New York 2nd – 4th December 2015 as lot 77. Durham University Library acquired it on 4th November 2017 from Sokol with generous assistance from the Friends of the National Libraries. 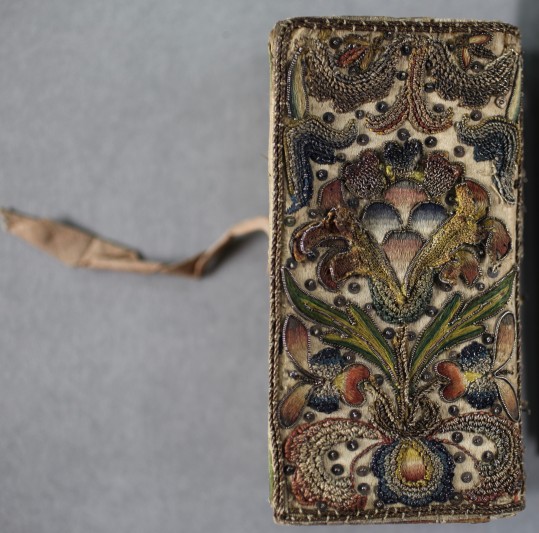