Lyon was originally a French privateer, captured ‘at the back of the Isle of Wight’ and brought into Portsmouth. On 11 February 1758 Letters of Marque for the Lyon were registered by the High Court of Admiralty (TNA HCA 26/9/24 f.25). Armed with 10 carriage and four swivel guns, she had a burden of 70 tons and a crew of 50, including a lieutenant, gunner, boatswain, carpenter, surgeon and cook. The same year Lyon captured De Snip, a Dutch merchant ship suspected of direct trade with French West Indies, on her return from St Eustatius to Amsterdam, laden with sugar, coffee and cotton. Both the ship and goods were condemned by the High Court of Admiralty, and the cargo was sold ‘by the candle’ at Garraway's Coffeehouse, Exchange Alley, Cornhill, on 12 October. The ship was held at Rye for 57 days, and her crew carted over from Hastings to sail her home once the prize-money had been settled. They seem to have been well cared-for: ‘Paul the Dutchman’ received medical attention on shore at the cost of the Lyon’s owners.

On 19 March 1758 the Fox privateer captured the Danish merchant ship Constantia, also returning from St Eustatius laden with French sugar, coffee and cotton. Among the Prize Court papers (HCA 32/176G) are the master's log, 1753 to 25 March 1758 (in Danish or Norwegian) and 164 pieces of mail. A further triumph for the Fox was the capture on 25 February 1758 of the Drie Gebroeders laden with indigo, amounting in value to £1812 6s 6d. The cargo, referred to as ‘the blue’, was packed at Hastings and carried up to London for sale.

The cutter Triton was engaged in the blockades of Brest and Belle Isle under Admiral Edward Hawke. Her service is graphically illustrated in a series of letters from the master, Richard Harman of Hastings, to her agent John Spencer Milward. These few excerpts give some flavour of the correspondence. ‘Sir I desire you will let me have an answer from you to know how things go at home for it goes bad enough with me, for I cannot keep my sail nor clothes dry on board and our men will leave me when I arrive again for I have no peace on board, my men have not been dry these three weeks for the duty is so hard. The Brest fleet is still lying in Brest harbour with their yards and topmasts down, for I am sure they will not come to sea this year and there is no fear of an invasion in England by the French this year to my opinion. The reason that I am forced to do so much duty is because our boat has a great name of sailing, and by that reason I am sent with expresses.’

Hastings has a great maritime tradition to this day, and the exploits of its privateers and smugglers live on in the public imagination. Until the acquisition of these papers, there has been little local documentary evidence of the realities of such activities, nor of the identities of the men who owned, commanded and sailed the vessels. We are grateful to the Friends for filling that gap in the record by assisting with the purchase of these fascinating papers. 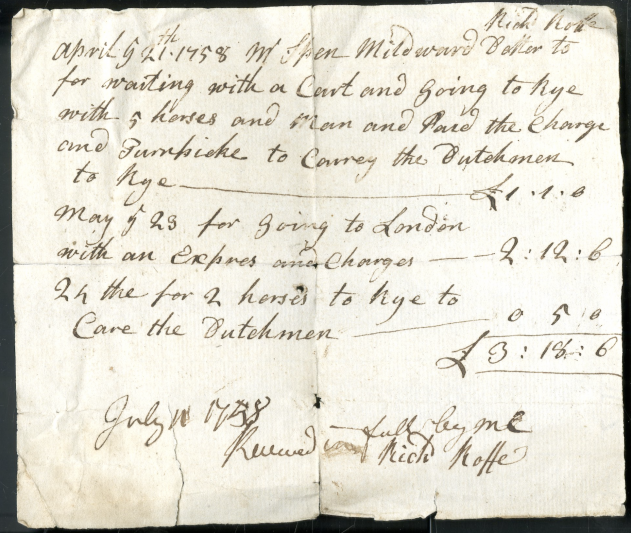 Richard Roffe's bill for a cart to carry the Dutchmen to Rye in 1758. 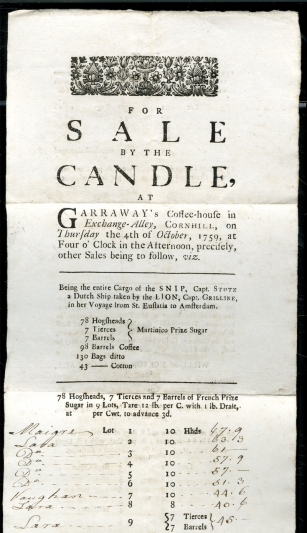 Advertisement for sale by candle of the cargo of De Snip, taken by Lyon, 4 October 1759. Images courtesy of East Sussex Record Office.