The Pedigree of Gawen Goodman of Ruthin

Formerly displayed in the bar of a public house in the Cotswolds, this parchment pedigree of a prominent Welsh Elizabethan merchant was purchased privately by the National Library of Wales in March 2017, with the aid of a grant of £7,500 from the Friends of the National Libraries.

The pedigree was drawn up in 1584, in English, for Gawen Goodman (1526-1604) of Ruthin, Denbighshire, the rich mercer brother of Gabriel Goodman (1528-1601), Dean of Westminster. It traces his ancestry back to the royal and princely houses and noble tribes of Wales, and is based on the genealogical testimony of Welsh herald-bard Simwnt Fychan (1530?-1606). Moreover, it is drawn and painted by Richard Thomlyns, a local heraldic artist from Denbigh, whose work is otherwise unattested.

Measuring 870 x 500mm, the linen-backed parchment is tapered at the base to give the visual effect of a shield, and 88 painted heraldic shields, with branching lines of descent in pied de grue fashion, are accompanied by the achievement of the patron at the lower right-hand base. It is a striking visual representation of the desire expressed by an Elizabethan gentleman for social status to match new wealth, and could have been prominently displayed by Goodman at Nantclwyd, his home in Ruthin, alongside his portrait, dated 1582, now at the National Museum of Wales.

The pedigree was seen by Angharad Llwyd, the antiquary, at the home of Goodman Roberts, a Ruthin attorney, and ‘a descendant of the family’, in 1820s (as attested in NLW MS 1591D), and again during the same period by the Rev. Richard Newcome, who refers to it in his Memoir of Gabriel Goodman, DD, Dean of Westminster (London, 1825). Subsequently it disappeared from view and remained ‘lost’ until discovered in the south of England in 2012. A study of the heraldry and history of the document was published in the Denbighshire Historical Society Transactions in 2014, written by Dr Robert Colley, who was responsible for its preservation and return to Wales.

Between September and December 2017, a reproduction of the manuscript was displayed in the National Library’s What's New? Recent Accessions exhibition, and the original pedigree made a dramatic appearance on stage at a public lecture at Aberystwyth on 4th October  of that year. 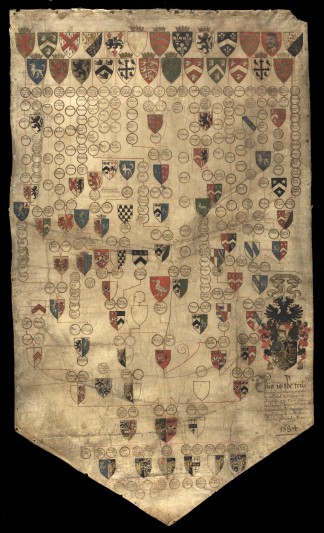 The Pedigree of Gawen Goodman of Ruthin. Courtesy of the National Library of Wales.