John Napier, of Merchiston (1550-1617), A Plaine Discovery of the whole Revelation of Saint Iohn: set downe in two treatises. Edinburgh: printed by Robert Walde-grave, printer to the Kings Majestie. 1593; and James VI, King of Scotland, 15 in forme of ane sermone. Imprentit at Edinburgh be Henrie Charteris, 1588.

This volume contains two examples of 16th-century Scottish printing bound together in one volume. Both works concern the apocalyptic passages in the Book of Revelation in the New Testament, commonly attributed to John the Apostle.

Best known for his work as a mathematician, John Napier’s most widely published work was this theological work, the Plaine Discovery. Napier adopts a strongly anti-Catholic attitude and urges his king James VI to purge the court of papists, atheists and ‘newtrals’. In his dedication to King James, Napier refers to James's earlier Ane fruitfull meditatioun, written in the summer of 1588 while England and Scotland prepared for the much-heralded arrival of the Spanish Armada. Although Scotland was officially neutral, for James a Spanish victory in England would have meant at best a forced public conversion to Catholicism and submission to King Philip of Spain, and at worst deposition or assassination by the powerful Scottish Catholic lords. However, the young king prevaricated on offering support to England and only wrote to Queen Elizabeth at the last minute to offer military aid. Instead he devoted himself to writing a meditation on some selected passages of the Revelation, which is preceded by a translation in Scots of these passages. Although James only indirectly refers to the Armada, he concentrates his attack on papal authority by demonising Philip's supporter, the Pope, as an instrument of Satan, and emphasises his own position as a key opponent of national (and international) importance who can counter Satan’s ability to deceive ‘the nations universall’. His second published work only appeared at the beginning of October as the last remnants of the Spanish fleet struggled to find their way home around the north coast of Scotland and Ireland.

Although both works were written primarily for a Scottish readership, the volume has a provenance which goes back to 17th century England. It been heavily annotated in two or three neat early 17th-century hands. Three early owners have been identified: a Robert Langley; Richard Lodge, wealthy Leeds woollen cloth merchant, builder of Red Hall, Winmoor, Shadwell, near Leeds; and Ralph Thoresby, F.R.S. (1658-1725), antiquary of Leeds, with his ink inscription “ex Libris Rad Thoresby pr 16d” at the foot of A3r of the Napier. Thoresby includes the present volume in ‘A Catalogue of the Various Editions of the Bible in this Musaeum’ appended to his Ducatus Leodiensis: or, the Topography of the Ancient and Populous Town and Parish of Leedes (London, 1715), pp. 501-14.

Although the Napier edition is widely held in UK libraries (although this copy does include the first leaf which is blank apart from the printed letter 'A' and which is missing from all the National Library's existing copies), there are only four copies of Ane Fruitfull Meditatioun recorded in ESTC (S101073) and none of them are in Scotland.

Title pages of Napier and James VI's works. Courtesy of the National Library of Scotland. 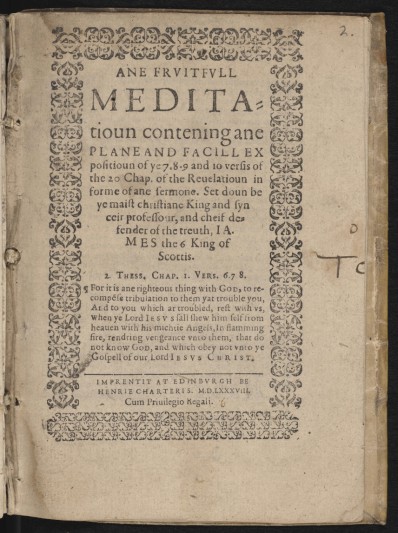