This plan was offered for sale to Durham County Record Office in June 2017 and purchased with the generous assistance of the Friends of the National Libraries. Unfortunately it is incomplete and unsigned, but provenance strongly suggested that it was a preliminary design by Ignatius Bonomi for the Durham Assize Courts and Durham Gaol, which would date it to around 1811.  Although later plans of the prison and courts survive in our collection, these date from the mid-19th century onwards.

The pen and grey wash plan is titled, 'The Ground Plan of a Design for a...', and shows Governor's office, work rooms, stores, kitchen, scullery, serving rooms, common halls, watch house and prison.  On the reverse is a much later note 'Joseph? or Ignatius'; also in different hands, 'Views of London' and 'Plan of House of Industry’;  the plan had been used by the Bonomi family as a wrapper for other drawings.

Ignatius Bonomi was the eldest son of the Italian architect Joseph Bonomi (1739-1808) who settled in England in 1767, working at first as a draughtsman for Robert and James Adam, before setting up his own influential practice.  Ignatius developed a strong and thriving practice in Durham and the North East.  As Surveyor of Bridges for County Durham, in 1824 he designed one of the first railway bridges in Britain, over the River Skerne near Darlington, for the Stockton and Darlington Railway; consequently he is sometimes referred to as the first railway architect. He also undertook much domestic work, on which he employed an eclectic range of styles ranging from Classical to Gothic.  His commissions included designs for Durham Castle, Lambton Castle (where he continued his father's work), Burn Hall and Eggleston Hall.  Among Bonomi's commissions for churches was work at Durham Cathedral.

Ignatius Bonomi's earliest scheme as a young architect, completed when he was only 24 years old, was for the Durham Assize Courts (1811), in Elvet, Durham City, this sheet possibly being part of Bonomi's preliminary design for the project.  The curved wall on this plan, where the watch house is located, was not executed, that part of the site being squared off by the Governor's House/Judges' Lodgings.  The executed Assize Courts comprises a long, low building of considerable dignity, still in use as the Crown Courts.

Given his success with the Assize Courts, Bonomi was called in to complete the new Durham Prison, being built adjacent to the courts on the Elvet site.  This project had encountered some difficulties.  A new prison was required to replace the jail in Durham's Great North Gate, and Bishop Shute Barrington had pledged £2,000 towards the construction cost.  The foundation stone had been laid by Sir Henry Vane Tempest on 31st July 1809 and the first architect, Francis Sandys set to work.  His work was criticised as inadequate and, following his dismissal, much of it was demolished and the architect George Moneypenny took over, but died with the work incomplete. The young Ignatius Bonomi was appointed to see the new 600-cell prison through to completion.  It received its first inmates in 1819 and, like the Assize Courts, is partly still in use. 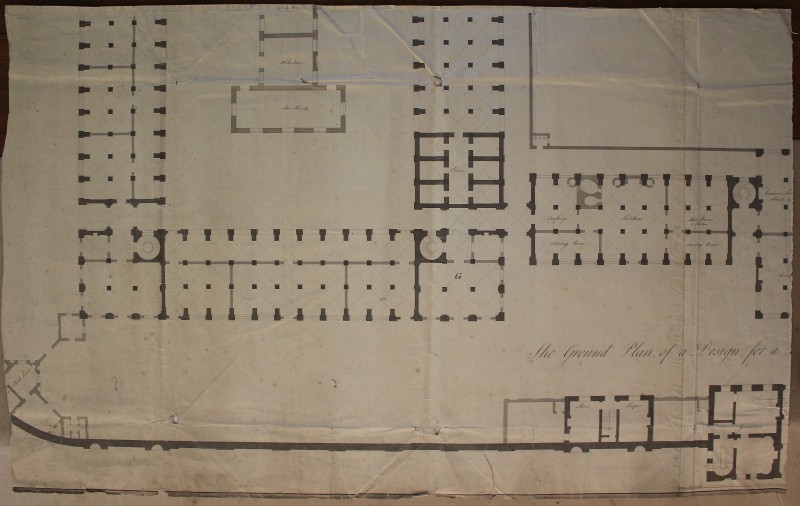