A Psalter from Medingen

This 15th-century Latin manuscript Psalter (with some added German vernacular prayers) from the convent of Medingen is a new addition to the corpus of surviving manuscripts from the Cistercian convent of Medingen in Lower Saxony, and joins the two examples (an Easter prayer book and a Manual for the Provost) already in the Bodleian.

The origins of the convent go back to the 13th century: it was one of the five female houses known collectively as the ‘Heideklöster’, the monasteries of the Lüneburg Heath. In the last quarter of the 15th century the convent was reformed under the influence of the ‘Devotio Moderna’ movement. About fifty manuscripts from Medingen have been identified: some were dispersed during the Reformation, others sold over the centuries. The convent survives today as a Lutheran community. The Psalter is now shelfmarked MS. Don. e. 248. A website on the Medingen manuscripts has been created by Henrike Lähnemann, Professor of Medieval German at Oxford.

The characteristically small manuscript survives in a binding of blind-stamped brown leather over wooden boards which may be original. Attached to the verso of the upper board was once a bone or ivory plaque, also 15th- century but of separate origin, depicting Pontius Pilate washing his hands: it probably once formed part of a casket depicting scenes from the Passion of Christ. Though the manuscript and the plaque had been separated, the Bodleian has been exceptionally fortunate in managing to acquire them both. Further research may allow us to ascertain whether the plaque was inserted as an act of piety in the convent, or as an act of romantic antiquarianism by a later collector. 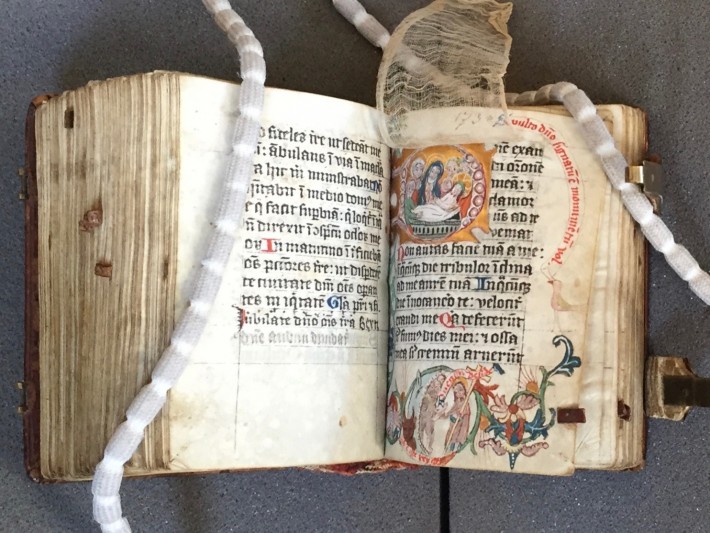 Medingen Psalter, viewed by FNL members during a visit in 2016 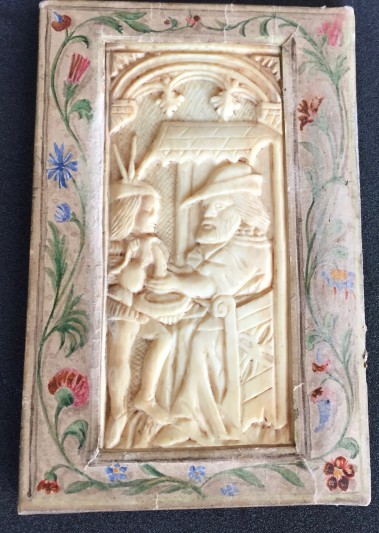 Ivory plaque, 15th century, attached to the verso of the upper board. Images courtesy of the Bodleian Library.