Once more Campion Hall in Oxford is indebted to the Friends of the National Libraries, for a full purchase grant which has secured for us a really fine copy of the 1929 first edition of Coleridge’s Ancient Mariner, with line engravings by David Jones. It was published by Douglas Cleverdon, who later became famous as a pioneering radio producer, responsible, most notably, for the production of Dylan Thomas’s radio play Under Milk Wood. This is a particularly appropriate acquisition, as Jones was for a long time a friend of Campion Hall, a small Jesuit College in Oxford, sending cards and small works of art, and advising on the decoration of the painted chapel. His artist’s proofs for the Ancient Mariner engravings came to us after his death, but we have never had a copy of the book until now. Jones, like many artists and writers of the mid-20th century, was a friend of the Hall’s tireless and brilliant Master, Fr. Martin D’Arcy SJ (1888- 1976), who collected contemporary works (mostly, but not all, by Roman Catholic artists) as well as Old Masters.

It is particularly pleasing to record that the extraordinary speed with which the Secretary of FNL responded to our request, impressed the kind poet-bookseller Peter Scupham of Mermaid Books so much that he made a first edition available to Campion Hall at an exceptionally generous price, as he felt that book and purchaser were perfectly matched. We are most grateful to both!

It is most fitting that this, one of the finest artist’s books of the British 20th century, should find a home at Campion Hall, where it joins Jones’s own proofs of the engravings. The first gift which Jones gave to the Hall dates from the same year as the Ancient Mariner – an engraved Christmas card of the Nativity. An entertaining sidelight on Jones’s relationship with D’Arcy and Campion Hall is offered by a letter from (the then) Sir Kenneth Clark to Clifford Ellis, the mosaic artist. Clark was trying to secure for Ellis a commission to decorate the apse of the main chapel in the Hall, and reassured him, “Fr. D’Arcy is very intelligent and sympathetic. He is an admirer of the work of David Jones, so that I do not suppose that he will be too academic for you.”

The carved panel of St Martin at Campion Hall, which Eric Gill made in 1935 for the main staircase, seems to have had considerable input in design from Jones who was then a close associate of the Gill household, especially in the tender figure of the tin-hatted soldier-saint.

In 1939, Jones was staying at Campion Hall to advise on the decoration of the Lady Chapel, it appears that he was first choice, and it was him who suggested Stanley Spencer as second choice. Both were sadly disqualified by debilitating nervous illnesses in the aftermath of the First World War, and the commission eventually went to Charles Mahoney. Importantly, it is Jones who records the presence of a number of refugees from Germany and Austria at Campion Hall that summer, including the eminent classicist Rudolph Pfeiffer, who had fled with his Jewish wife. This was a part of a wider attempt by D’Arcy and the British Jesuits to help refugees from the Nazis.

In the 1960s, Jones’s association with the Hall revived as he made friends with the poet Fr. Peter Levi SJ (1931-2000), Jones sent his Christmas card for 1962, and made one of his idiosyncratic and carefully-considered pages of drawn lettering for Peter Levi’s ordination card. After Jones’s death in 1974 it was Peter Levi who preached his requiem sermon in Westminster Cathedral.

For all these reasons, Campion Hall is particularly grateful to the FNL for this purchase grant. 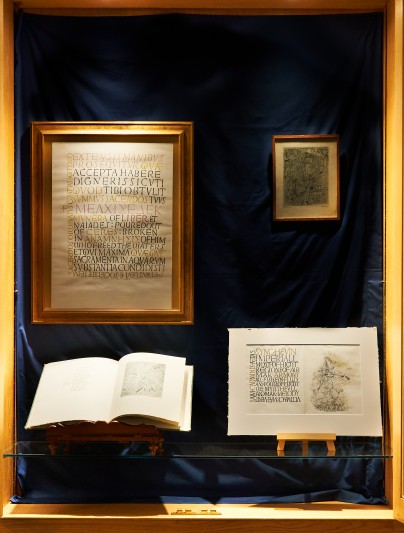