Laurence Sterne (1713-1768) was the son of a soldier in the army and was born in Clonmel, Co. Tipperary.  He went to Jesus College, Cambridge, and later took orders to eventually become Perpetual Curate of Coxwold, near York. In the house where he lived, now known as Shandy Hall, he wrote most of The Life and Opinions of Tristram Shandy, Gentleman, which gained him celebrity.

In 1768 he published the first two volumes of A Sentimental Journey through France and Italy promising his subscribers that the remaining two volumes would be published ‘early the next Winter’.  Sterne died a month later leaving the story incomplete.

Artists quickly responded to Laurence Sterne – both the man himself and his works. From the magnificent portrait by Sir Joshua Reynolds, (painted in 1760) that graces the 18th-century collection in London’s National Portrait Gallery, to the most recently illustrated edition of A Sentimental Journey by the political cartoonist, Martin Rowson (published in 2018) we can trace the history of a book that has never been out of print since the date of publication.

Virginia Woolf states in her introduction to the World’s Classics edition (OUP 1928) that ‘no realist could be more brilliantly successful in rendering the impression of the moment. [The book] is a succession of portraits… a succession of scenes.  And though the flight of this erratic mind is zigzag, like a dragonfly’s, one cannot deny that this dragonfly has some method in his flight, and chooses the flowers not haphazard but for their exquisite harmonies or for their brilliant discords.’

The first exhibited painting taken from ASJ, The Monk by S. Rickards, was shown at the Society of Artists in 1771.  Subjects such as the Monk, the Old Man and the Ass, the Captive and, above all, Maria, became commonplace and enterprising publishers saw rich commercial opportunities.

The original watercolour drawing by Leloir on the half-title (each one unique to every copy in this limited edition) does not seem to make a direct reference to the narrative of the text and so Leloir seems to be creating new, unique scenes in addition to the illustrations throughout the text. The Laurence Sterne Trust has seen other editions with these illustrations to the half title but none have been previously held in the collection before this edition was acquired with the help of Friends of National Libraries.

Illustrated editions by Gwen Raverat, Vera Willoughby, Brian Robb, Nigel Lambourne, Norah McGuiness, T H Robinson are represented in the collection at Shandy Hall. The Laurence Sterne Trust is delighted to have this most handsome edition of A Sentimental Journey join the collection on the 250th anniversary of publication. 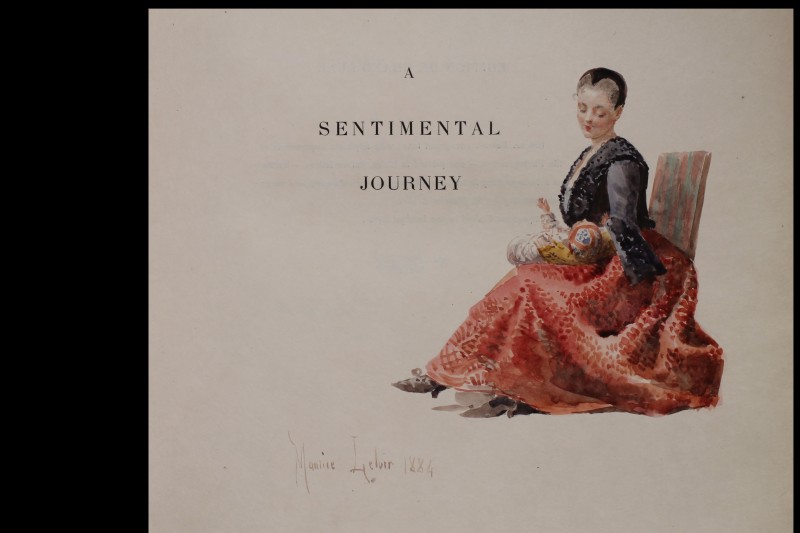 The original watercolour drawing by Leloir on the half-title. Courtesy of the Laurence Sterne Trust.