The poster collection contains 17 German posters covering a broad range of themes connected with the First World War, Communism, anti-Bolshevism and The Weimar Republic. Half the posters were commissioned by the Spartakusbund, a rigorously Marxist movement, founded by Karl Liebknecht, Rosa Luxemburg and Clara Zeitlin who split away from the Social Democratic Party of Germany (SDP) when the party decided to support German government’s declaration of war on Russia. The driving force behind the 1918 November revolution, the Spartakusbund became the German Communist Party (KPD) in the following December. There are two copies of the famous KPD election poster “Wählt Kommunisten! KPD” circulated around 1919. This poster is one of the most famous political posters of its time, not least because the message conveyed by its striking visual content: the ghost of the recently murdered Liebknecht haranguing five caricatured members of chancellor Ebert’s government, while outside a crowd of workers has gathered. “Wählt Kommunisten! Nicht diese Feinde der Arbeiter!” is an election poster published around 1920. The poster depicts five opponents of communism: a member of the Independent Social Democratic Party of Germany; a priest; a soldier with a swastika inscribed on his helmet; an aristocrat; a member of the SDP.

After the Kaiser’s abdication, the SPD was given the task of forming a viable government for the German Republic, now usually referred to as the Weimar Republic. One of the offices established early by the new government was a propaganda and information service, whose main task was to foster a return to social order, to combat food shortages and increase productivity by getting people back to work. From this era comes “Wer suchts Arbeit?”. The giant poster of 1918, measures 137 x 95 cm on two sheets, aimed at getting people back to work, both in the towns and on the land. It was designed to be clearly readable at a fair distance and to give the address of a job centre at bottom.

The Wiener Library is one of the world's leading and most extensive archives on the Holocaust and Nazi era. Formed in 1933, the Library's unique collection of over one million items includes published and unpublished works, press cuttings, photographs and eyewitness testimony. We already hold a number of posters and political cartoons covering a broad range of themes connected with the Holocaust, Second World War, and Nazi society. These new acquisitions will be an excellent addition to our existing collection. The acquired posters will be accessible via our Collections Online once they are fully catalogued. In time we plan to make scanned images available on our website, improving accessibility to the general public. 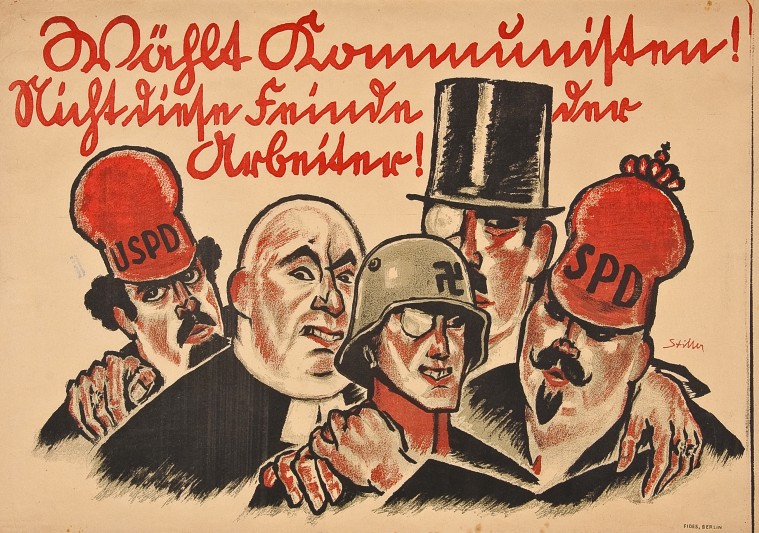 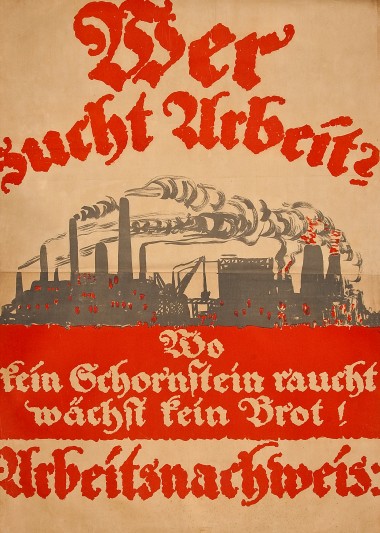