The St Cuthbert Gospel is the earliest surviving intact Western book: it is in its original binding, and it has never been restored or resewn. It was probably written by a local scribe at the twin Northumbrian monasteries of Wearmouth-Jarrow in the late 7th century, a renowned international centre of learning, scholarship and book production at the time. The manuscript retains its original, uniquely well-preserved, decorated red leather binding.

Decorated leatherwork dating from before AD 1000 is extremely rare and although the structure of the bookbinding is fragile, it is in outstandingly good condition and preserves evidence of the original pigments used. Measuring approximately 135 x 90 mm, the 94 vellum pages are inscribed in a small, beautiful, even, uncial hand and contain little decoration, with the exception of a number of plainly illuminated ink initials.

The manuscript’s importance lies not only in its age and condition, but also in its intimate association with St Cuthbert (c. 635-687), one of Britain’s most famous saints. It was buried alongside his body on Lindisfarne in 698 and found in his coffin at Durham Cathedral in 1104. The Gospel’s association with Cuthbert is of immense historical importance, and closely links the volume to the Lindisfarne Gospels: perhaps the greatest treasure in the British Library’s collection, which is said to have been written in Cuthbert’s honour. 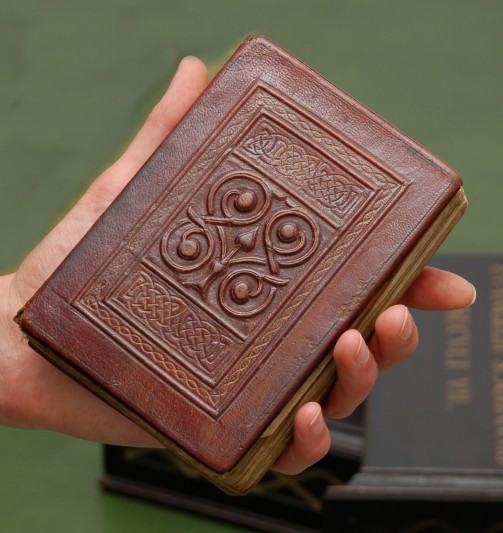