A System of Anatomical Plates of the Human Body

The Royal Scottish Academy of Art & Architecture (RSA) has acquired this rare and significant Scottish anatomical volume with the support of the Friends of the National Libraries. Although other copies of the work are available, this version contains two additional plates not included in the first issue. The volume is in fantastic condition, with only minor leaching to the text blocks, while the plates remain immaculate. Evidence of handling adds to the romance of the work’s use as an active anatomical aid.

John Lizars was born in Edinburgh and studied medicine, he was appointed professor of surgery at the Royal College of Surgeons, where his students included Charles Darwin. He was revered as a surgeon and professor and it is this publication for which he is best remembered. This issue presents the text and plates combined in one volume, it having originally been issued in 12 folio parts. The plates mostly derive from original dissections and were engraved by John Lizars’ brother, William Home Lizars HRSA. Most famous for his work on John James Audubon’s Birds of America, until this acquisition W H Lizars was unrepresented in the RSA’s holdings for any of his significant printmaking.

The beautifully engraved plates are hand-coloured, giving the volume an artistic value equal to that of its value surgically and anatomically. In keeping with the RSA’s cross-disciplinary art focused library, it resonates strongly with the historical and contemporary identity of the RSA as an institution.

The history of the RSA includes the establishing of a life school in 1837 and as such anatomy has a core presence in the institution. The collections contain many drawings by students that would have been aided by anatomical volumes such as this one by Lizars, and the capture of this volume adds an important Scottish context to other magnificent works in the library, including a first edition copy of Andrea Vesalius’ De Humani Corporis Fabrica. Libri Septem. (Basle, 1543), Bernard Siegfried Albinus’ Tabulae Sceleti et Musculorum Corporus Humani (London, 1749) and Albrecht Durer’s Alberti Durer clarissimi pictoris et geometrae de symetria partium in rectis formis humanorum corporum…(1534). The RSA’s collections and library operate in harmony with the practice of its member artists and through a diverse exhibition programme. In 2017/18 anatomy figured centrally in the major exhibition Ages of Wonder: Scotland’s Art 1540 to Now, where contemporary practitioners, such as renowned anatomical artist George Donald, taught students from life models in a gallery including anatomical volumes such as the Lizars. Although this acquisition has come too late for this project, it will be displayed at the RSA in 2019 and will join the touring exhibition Ages of Wonder: The Royal Scottish Academy Life School, due to hit the road again in 2020. 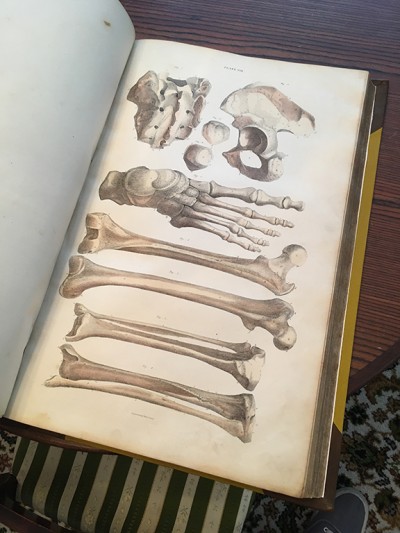 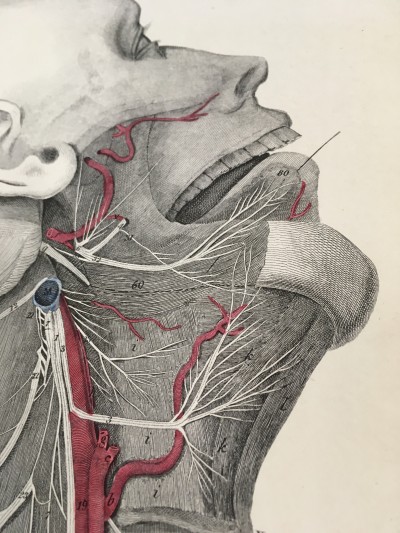 Plate XV detail: Blood vessels of the head and neck. 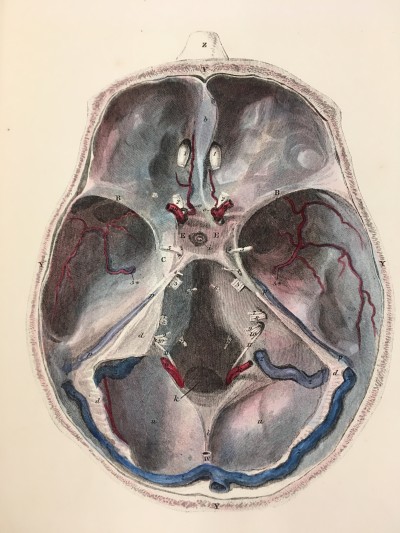