Thanks to the generosity of the Friends of National Libraries, the Institution of Civil Engineers (ICE) was able to obtain a number of drawings relating to the construction of Tower Bridge at auction. These are a particularly important additions to our collection as they appear to come from the office of Sir John Wolfe Barry, engineer for the bridge, and complement a collection we already hold.

Sir John Wolfe Barry was a versatile engineer and collaborated with a number of partners, His career began in the 1860s on Charing Cross and Cannon Street Railway bridges under Sir John Hawkshaw. He went on to be involved in various projects including Barry, Immingham and Royal Edward (Avonmouth) docks, the Metropolitan District railway in London, the Ballachulish branch of the Callender-Oban railway including Connel Bridge and of course,  probably his most famous work - Tower Bridge.

Some years ago, the ICE was presented with a large collection of Sir John Wolfe Barry’s drawings. Although these cover most of his projects, there were no drawings of Tower Bridge.  The drawings each had a distinctive stenciled number which was also present on the Tower Bridge auction lots, confirming their source. There were also a few other drawings in other lots relating to other projects which also confirmed their authenticity.

The addition of the Tower Bridge drawings means that the ICE archives now have a comprehensive archive of one of the great civil engineers of the second half of the 19th century, represented in drawings, specifications, published papers and photographs.

The year of 2019 was a special one for Tower Bridge as it celebrated its 125th anniversary, having been built between 1886 and 1894. It was designed by Horace Jones, the City Architect, in collaboration with John Wolfe Barry, responsible for the engineering input - which was considerable given the opening bascule span, the suspension road and footway, the deep foundations in a tidal waterway, and the steel framing of the towers. The death of Jones in 1887 put Wolfe Barry in sole charge, although George Stevenson, Jones’ assistant, was responsible for the masonry cladding to the towers, which are such a key element of the visual appearance of the bridge.

The significance of Barry’s contribution has not always been fully recognized, with attention concentrated on the architecture and machinery.  These drawings show various aspects of the construction from the approaches to the foundations of the piers to the steelwork superstructure, which is hidden by the masonry exterior, and make clear the significance of both Wolfe Barry’s contribution, and that of Sir William Arrol’s firm.

Of eight contracts associated with the bridge, four are represented here (1, 2, 4, 6) and cover most of the civil engineering work. The majority of the drawings were produced by Sir William Arrol and Company to deliver contract 6, and show detailing of the steelwork.  The set of drawings showing details of the foundations is marked ‘Mr J W Barry’s copy’.

Other drawings of the bridge are to be found in the London Metropolitan Archives.

The drawings are currently undergoing cleaning and some minor conservation prior to being made available for researchers. 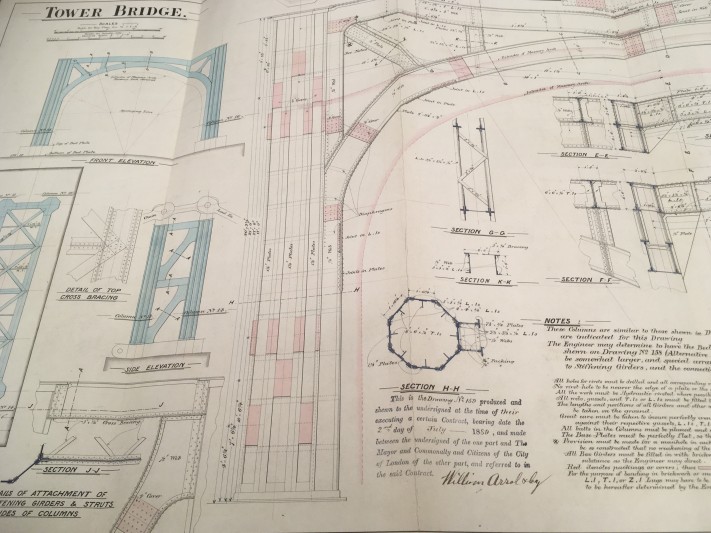 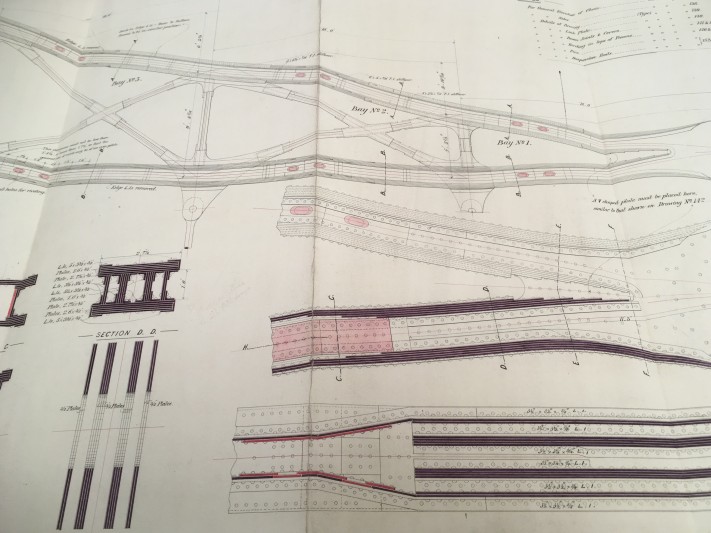 Deatails of some of the plans of Tower Bridge. Courtesy of the Institution of Civil Engineers.