The Library was very pleased to acquire a substantial manuscript commonplace book by Richard Fry (1759-1842)  largely dating from the early 19th century. Fry is an interesting figure in the history of 19th-century Congregationalism and Unitarianism and the subject of a major controversy in 1798. Born at Devonport into a Congregational family, he trained for the ministry first at the Western Academy, Bridport, and then from 1778 at Homerton Academy in London. He entered the ministry at Warminster, Wiltshire, in 1781, and in 1785 he moved to Billericay in Essex. His ministry was at first uncontroversial, and he enjoyed some success, but his religious opinions gradually altered and a number in his congregation detected a departure from orthodox Calvinism. Some began to absent themselves from his services as a result and others openly voiced their opposition. Fry was eventually asked to make a declaration of his beliefs before the whole congregation, and on 5 September 1798 he delivered a sermon recording his change of views in which he rejected the Trinity. The text of the sermon was inserted in the Church's minute book, and later published as The Exercise of Reason and Liberty of Conscience the Sacred Right of all Men in Examining and Professing the Christian Truth (1800). At a church meeting which followed 26 church members and 25 subscribers voted against him, and two members and 19 subscribers for him. Yet the Church treated him well. The senior deacon on fixing 7 October as his last Sunday, wrote they were 'desirous of testifying our esteem for you and concern for the inconvenience you may experience', offered him six months' salary. A number of his former congregation withdrew with Fry and they built a new meeting-house for him. Fry did not remain long and the Unitarian congregation barely survived his departure. He was subsequently minister of Unitarian congregations in Cirencester, Coseley, Nottingham, and New Meeting Kidderminster.

The date (1793) on the title-page of the volume suggests Fry began the volume before the change in his views became evident. There are nearly 500 pages, each page ruled out in a double column, in a very neat, but minute hand. The volume is so neat it seems likely that it was written up subsequently in a fair hand. Internal evidence, based on those references which are dated, helps confirm this impression. The volume is a commonplace book, the sources are secular not biblical. The items are copied from contemporary publications, such as the Monthly Review or the radical newspaper the Cambridge Intelligence, or from well-known sources such as Strype's history of Queen Elizabeth, or the writings of a variety of 18th and early 19th-century divines, such as the Baptist Robert Hall, and the strict Calvinist William Huntingdon. The contents are valuable for what they say about his reading, but also how he arranged his notes in the volume under the various headings is revealing. The volume is arranged by letters of the alphabet, but as the volume filled the alphabet was repeated many times. The subjects and the sources cited are both conventional and in some cases surprising. Under the letter L Fry had headings such as 'Liberty: Learning Love of Xt', 'Liberty of the Press', and unexpectedly 'Labour', which appears on closer reading to be concerned with the employment of the poor. The letter M covers the 'Mind', the 'Millennium', 'Miracles' and 'mermaids', and a poem entitled 'Much'. The volume provides information about what publications were available to him as a dissenting minister in a small market town in Essex. The size of the volume and the period it covers allows the reader to follow Fry's interests, and see how they changed over time. 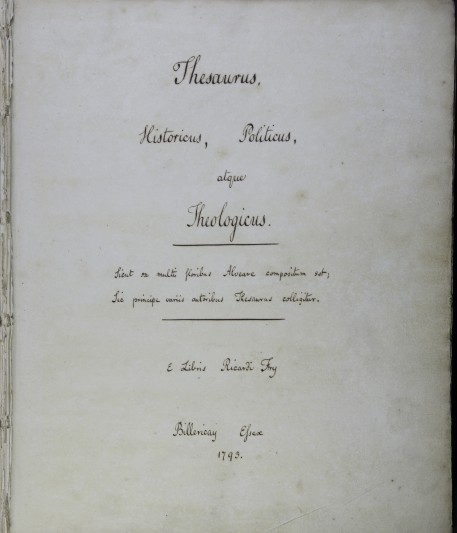 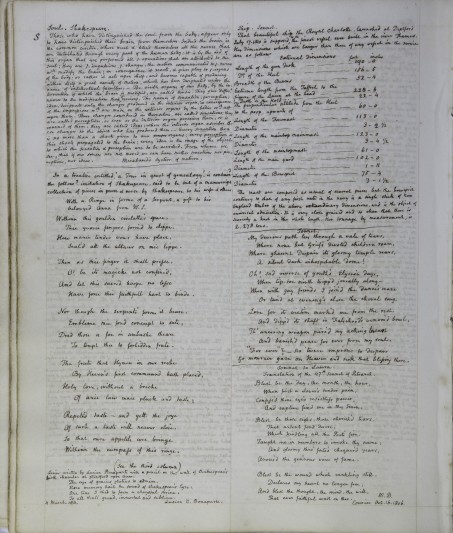 A page from the volume. Images courtesy of Dr Williams' Library.