Vivien Leigh is one of the most important film and stage performers of the 20th century and her profile attracts on-going visitor and global media interest. The V&A acquired Vivien Leigh’s archive in 2013 and has established itself as being the repository of related material. The archive contains around 7,000 letters, telegrams, scrapbooks, photographs, scripts and a collection of 3D stereoscopic slides. This is one of the most requested and popular archives in the Theatre and Performance collections and outputs from it include a touring exhibition, permanent displays in the Theatre and Performance galleries, a conference and an academic appraisal of Leigh’s career which was released in November 2017. That year marked the 50th anniversary of the death of Vivien Leigh and there were a number of events to mark this occasion, including group visits to the Vivien Leigh Archive organised by staff in Theatre & Performance.

The acquisition of the 1953 appointment diary is one of the ‘missing links’ in the almost full set kept by Leigh between 1929 and her death in 1967, using pocket/handbag sized Smythson diaries with ‘Vivien’ embossed in gold lettering on the front cover. The whole series offers an extraordinary insight into her life, work and career.

With support of Friends of the National Libraries, the V&A was able to acquire the diary at the sale organised by Sotheby’s on 26 September 2017. It will enter the National Collection of the Performing Arts and can be viewed (by appointment) at the V&A’s Research Centre. In due course, the diary will be displayed as part of a rotating display of objects in the permanent Theatre and Performance galleries at the V&A Museum. 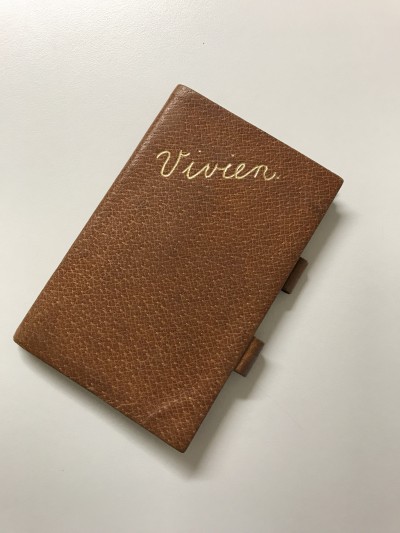 The appointment diary. Courtesy of the V&A Museum.