Voltaire moved to London in May 1726 to arrange publication of his long epic poem La Henriade free from the interference of the French censor. The first version of the work had appeared with a false imprint in 1723 and, while ostensibly about the Siege of Paris and the life of by Henry IV of France, it was an examination of tolerance. Although successful and widely admired (the French Regent awarded Voltaire a pension) the content attracted the attention of the censor and being unable to publish the poem freely in France he looked to the Huguenot printers and the more liberal intellectual culture of London. Voltaire revised and expanded the poem and sought subscriptions in England to support the publication of a fully illustrated edition. George I and the Princess of Wales subscribed along with more than 340 others, and printing began in the summer of 1727. The first edition of 750 copies (100 on large paper) was ready by the following March and although expensive at £3 for a non-subscribing copy, it quickly ran into a second, unillustrated edition, and at least one piracy in the same yea

This copy of the “fourth” London edition of 1728 is unrecorded and includes a three-page letter in Voltaire’s hand dated 25 April 1728 presenting it to Caroline of Brandenburg-Ansbach, Queen of Great Britain and Ireland, formerly the Princess of Wales. Although he mentions waiting until the fourth edition – “plus correcte et plus épurée” - to send a copy to the Queen he had in fact already written to present a first edition just ten days earlier (the book and letter are now housed in a library in Germany). Somewhat intriguingly Voltaire’s letter is at the back of the book and is bound-in upside down, posing a question as to whether the volume was ever sent. Professor Nicholas Cronk, Director of the Voltaire Foundation, has suggested that this unrecorded edition may have been invented by Voltaire as a gambit to impress the Queen, speciously implying the work had already run into four editions in just a few weeks. It could also be a gentle prompt to remind her to reply to his first letter of 15th April. Whatever the circumstances the history of this unpublished letter, and of this unrecorded London edition, deserves further scholarly attention.

The Bodleian holds one of the world’s best collections of Enlightenment manuscripts and books, and the University’s Voltaire Foundation is an international centre for eighteenth-century scholarship of the Enlightenment. The editorial team is close to completing the definitive edition in French of the Complete Works of Voltaire, the most ambitious project in French literature currently being undertaken outside France. 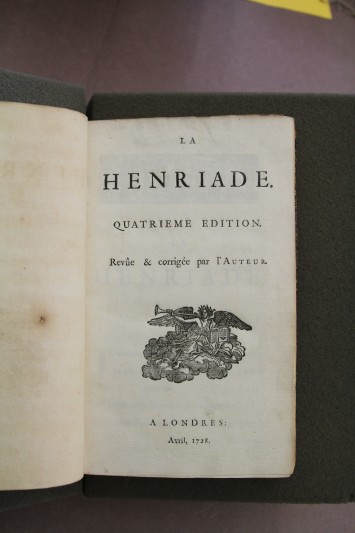 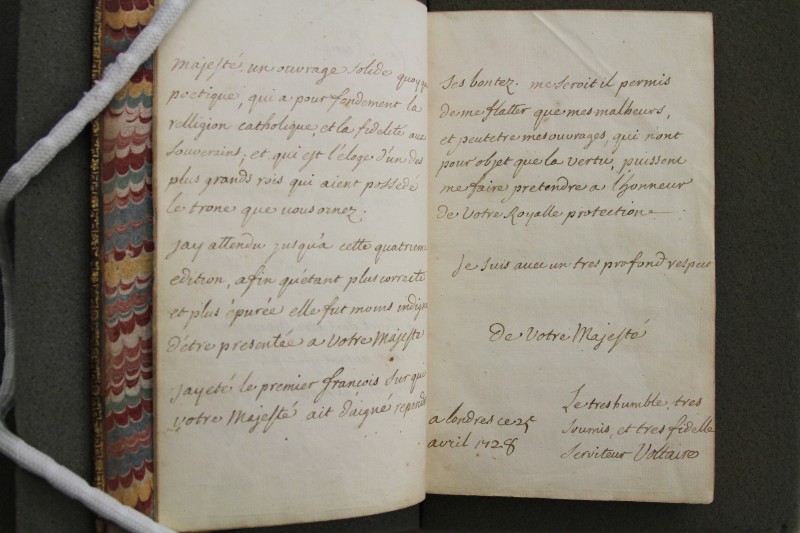