No sooner had we collected John Pattenden’s survey from Stowmarket than we were alerted to the appearance on eBay of another 17th-century map. But whereas the former was new to us, Giles Burton’s map of Ashes Farm in Icklesham near Rye was an old friend (albeit in monochrome), having been exhibited at Hastings Museum and photographed by the Ordnance Survey in 1936.

Burton’s map, which shows a sizeable farm, including both upland and marsh, is presented in ink and colour, now somewhat faded after decades of exposure to light. Like Pattenden’s survey, the estate is mapped with south at the top and north at the bottom. The title is presented within a renaissance cartouche, surmounted by a blank coat of arms, and the orientation of the map by an elaborate geometric compass rose.

Giles Burton (c.1590-1656) of Sedlescombe, near Battle, appears to have been a mercer or general shopkeeper who, as well as surveying landed estates, sold clothing and a variety of goods including needles, saddle-cloth and spectacles. Several examples of his work survive in the record offices of East Sussex, Surrey and Kent, spanning the years 1627 to 1649; in some of them he describes himself as ‘practitioner in some of the sciences mathematical’. That soubriquet, taken with the fine penmanship of his maps and his very neat handwriting, mark him out as a man of some learning, beyond the common run of tradesmen – indeed somewhat akin to the 18th-century East Hoathly mercer and diarist Thomas Turner, who himself took lessons in cartography. Burton’s hallmark was the use of metal stamps to reproduce the animals, men and houses with which his maps are liberally decorated, as well as the scrolled cartouches enclosing the acreage of each field. Burton clearly had no stamp for barns, which are inserted by hand. Attention was drawn to Burton’s use of metal stamps in an article by Catherine Delano-Smith in Imago Mundi 57 (2005) 59-62.

The land surveyed was owned by Thankful Frewen of Northiam, whose Brickwall estate in that parish Burton had surveyed in 1635. Frewen (1591-1656), purse-bearer and secretary to Thomas Coventry, Lord Keeper of the Great Seal, was the son of the Puritan Divine John Frewen (d1628), rector of Northiam; his elder brother Accepted Frewen (1588-1664) became president of Magdalen College Oxford in 1626, and Archbishop of York in 1660.

This map, an exceptionally fine example of the work of a well-known local cartographer whose innovative use of metal stamps has been the subject of a study in an internationally-acclaimed journal, is a prize acquisition for , and we are most grateful to FNL for their most prompt and generous assistance. 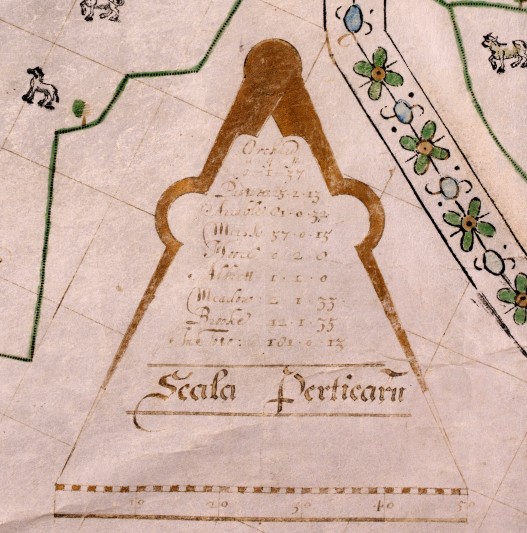 Detailed table of contents by land-type, surmounted by the dividers of a scale of perches.