The Remains of Henry Kirke White, with annotations by the Brontë family 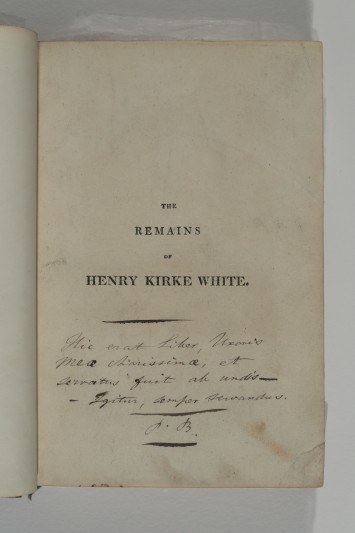 A two volume copy of The Remains of Henry Kirke White, Of Nottingham, Late of St. John’s College, Cambridge with an account of his life (1810) by Robert Southey. The book is a rare surviving possession of Mrs Maria Bronte, whose box, containing all her property, was shipwrecked off the Devonshire coast just before her marriage to Patrick Bronte in 1812. The book is heavily annotated by various members of the family and includes an unpublished poem by Charlotte.

The estate archive of the Graham family of Norton Conyers

The records relate to the North Yorkshire estates of the family at Norton Conyers and Nunnington and there are also papers from estates at Kippax, West Yorkshire and Bowland, Lancashire. The archive is therefore significant for the history of both North & West Yorkshire. There are a small number of medieval deeds but the majority of the papers date from the sixteenth to the twentieth century and the collection is particularly rich in seventeenth and eighteenth century material. Personal family papers and correspondence are well represented, giving a good picture of Graham family life through the ages and including a series of letters to Sir Richard Graham in the 1640s.
The archive sheds new light on the history of two outstanding North Yorkshire houses and strengthens our holdings of estate records in an area of the county which is currently under represented in our collections.

Survey of the manors and estates in Wiltshire, Dorset and Somerset of William Stourton, 10th baron Stourton of Stourton 1633-34 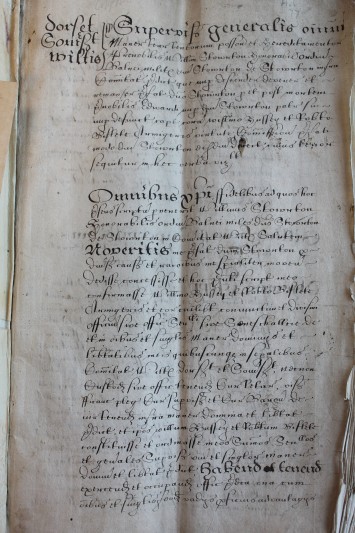 William succeeded his father Charles, 9th baron Stourton who died on 7 May 1633, and almost immediately appointed William Hussey and Robert Biflete as stewards to carry out the survey, which was completed in the following year. Although centred on Stourton, most of the manors were in Dorset, notably Gillingham, Lydlinch, Stourton Caundle in the north of the county and Overmoigne near Dorchester. The Somerset manors were Kingston by Yeovil and Frome Selwood. Penleigh in Westbury was the other Wiltshire manor. The volume will be of value to both the family historian, in providing names of freeholders, tenants and the lives on the leases and copyhold admissions, and the local historian with considerable topographical detail. 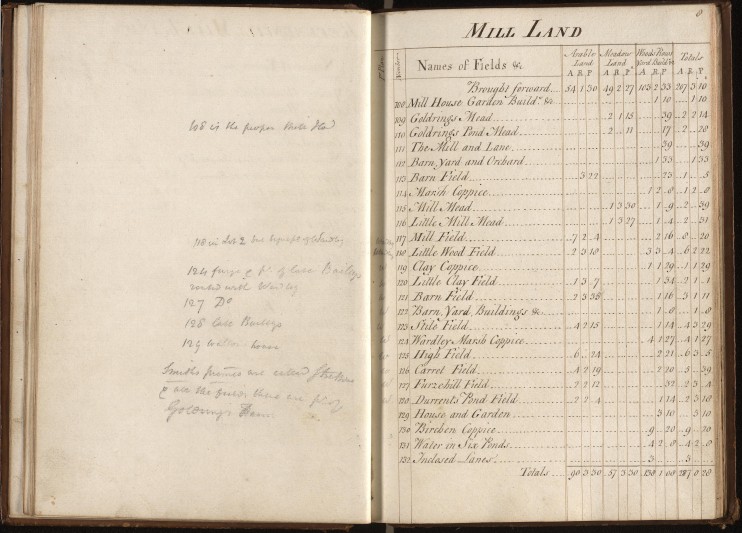 This volume provides a full survey of the estates of William Richardson in 1774, including a perambulation of the Manors of Rogate Bohunt and Clarks Dean. It records the acreage and cultivation of his lands and includes a fold-out map providing a detailed depiction of the properties and boundaries described in the survey. 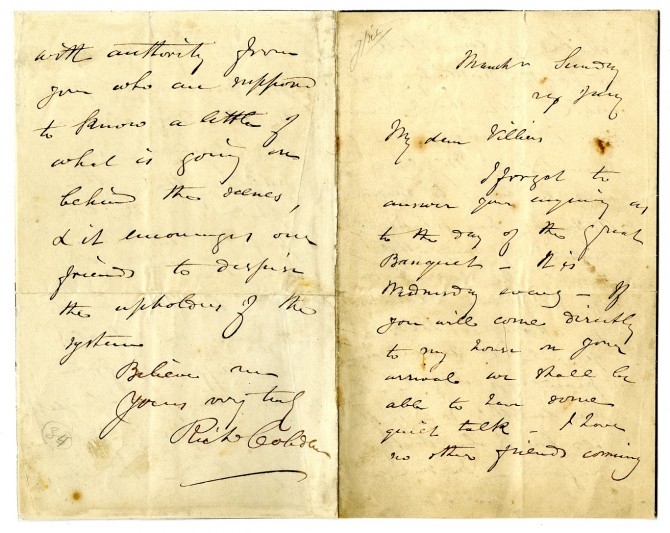 These two letters from Richard Cobden to Charles Pelham Villiers (1843) and Michael Corr Van der Maeren (1856) provide an important insight into Cobden’s political views and will be of great interest to 19th century political historians, particularly when viewed in conjunction with the Cobden Archive held by West Sussex Record Office. Villiers was the chief parliamentary ally of the Anti-Corn Law League whilst Van der Maeren was the founder of the Belgium Association for Free Trade.

John William Dunne is an intriguing and underappreciated figure in British history. Unusually, he achieved distinction in his day both as an aeronautical designer and pioneer and then later as an author and philosopher. He began his career as an army officer, serving in the Boer War. A heart condition returned him to England, where his interest in human flight took off. His many innovative aircraft designs, including an extremely stable tailless aircraft, ensured his high regard within aeronautical circles. As an accomplished engineer Dunne was honoured as one of the original six Fellows of the Royal Aeronautical Society. The archive is a pivotal assessment of Dunne as a literary figure and philosopher, containing a wide range of correspondence regarding his works. 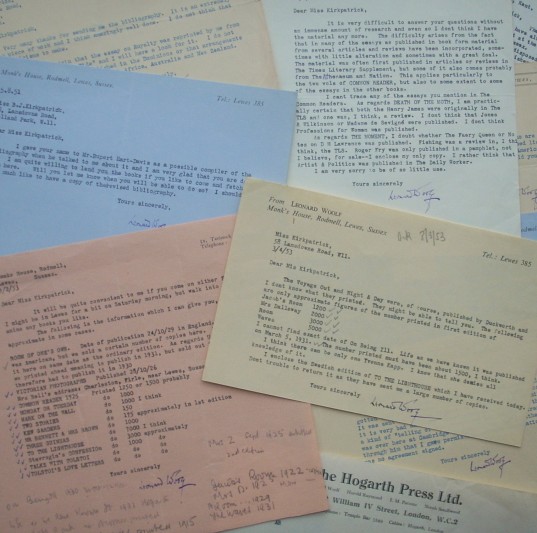 This archive of Virginia Woolf material was gathered by Brownlee Kirkpatrick (1919-2007), the bibliographer of Virginia Woolf, E.M. Forster, Edmund Blunden and Katherine Mansfield. The first edition of her Bibliography of Virginia Woolf was published in 1957. When Kirkpatrick began her research, many of those closest to Virginia Woolf were still alive, including her sister Vanessa Bell, Vita Sackville West and Leonard Woolf. The Kirkpatrick archive provides valuable information about Virginia Woolf's printed works, most from the Hogarth Press, but also provides much detail about the Bloomsbury group, allowing the reader to delve deep into what Victoria Glendinning has called Leonard Woolf's 'management of the past'. This archive is a splendid addition to the collections at St Andrews, and the value of the archive to Woolf scholars cannot be overstated.

The papers of Thomas Manning 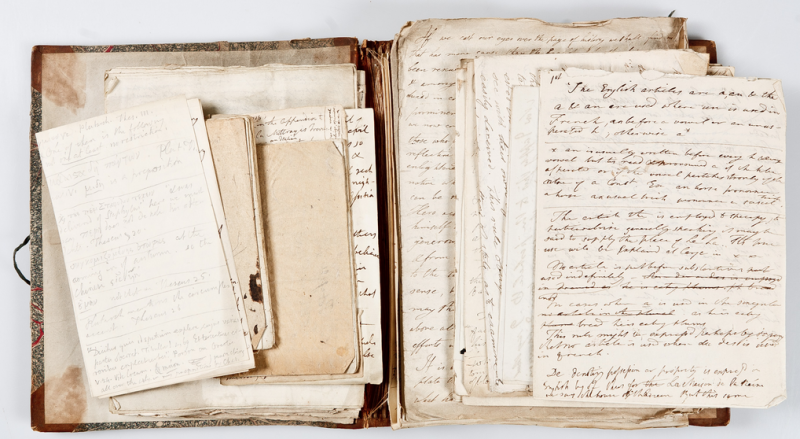 Thomas Manning was among the first European lay scholars of Chinese language and culture, and one of the earliest sinologists from the British Isles. He was the first Englishman to visit Lhasa, which he reached in 1811, and where he met the child Dalai Lama. Shaped by the intellectual climate of late-Enlightenment Europe, Manning was distinguished by a rare independence of mind and breadth of cultural sympathy that signifies him as one of Britain’s most interesting early Orientalists. This collection of papers represents by far the largest collection of Manning material that has ever come to light. It consists of over 400 ms. letters to and from Manning, as well as papers, notebooks, diaries (almanacs), visiting cards, and printed ephemera, and the 99 pp. ms. copy of the narrative of the journey of Thomas Manning to Lhasa, which was published in 1876 in Narratives of the Mission of George Bogle to Tibet and of the Journey of Thomas Manning to Lhasa.

The Harrison & Seel archive relating to the Festival of Britain 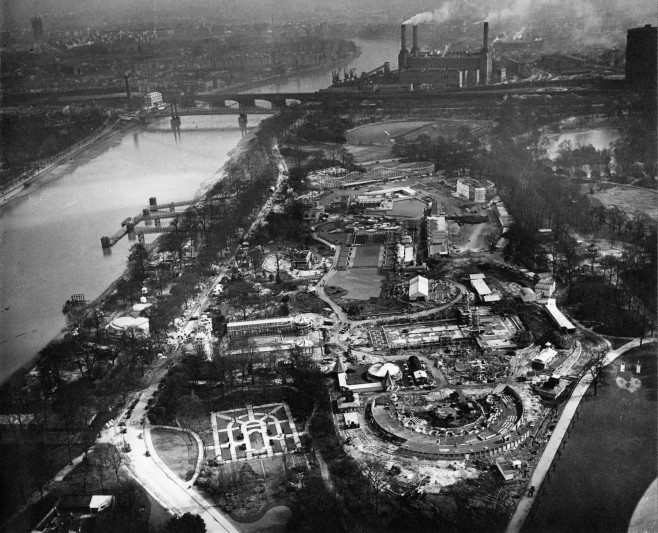 The Harrison & Seel archive consists of photographs, drawings, sketchbooks and miscellaneous items (press cuttings, magazines, copies of the official guide and other paper documents, as well as four mid-18th century hand-coloured engravings of Vauxhall & Ranelagh Gardens that the architects used as a source of inspiration). This extensive archive represents a very fine addition to the RIBA Collections, as it documents a very important moment in Britain’s cultural and architectural history, recording a lesser-known aspect of the Festival of Britain that has left even fewer physical traces than the South Bank Exhibition at Waterloo. 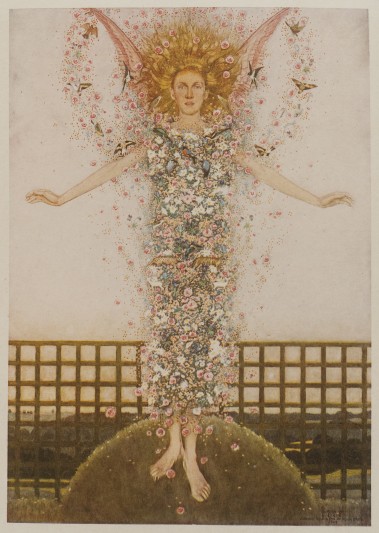 An early twentieth-century edition of ‘The Romaunt of the Rose’ by Geoffrey Chaucer. This publication was the first book printed by the Florence Press, an imprint of Chatto and Windus, intended to compete with private presses by producing books of similar style and beauty. The press commissioned a special type and often hired well-known artists to add lavish illustrations in a Pre-Raphaelite style. The University of Reading is well-known for its established and growing expertise in book and printing history, and this volume complements the University’s significant holdings in the areas of printing, publishing and typography.